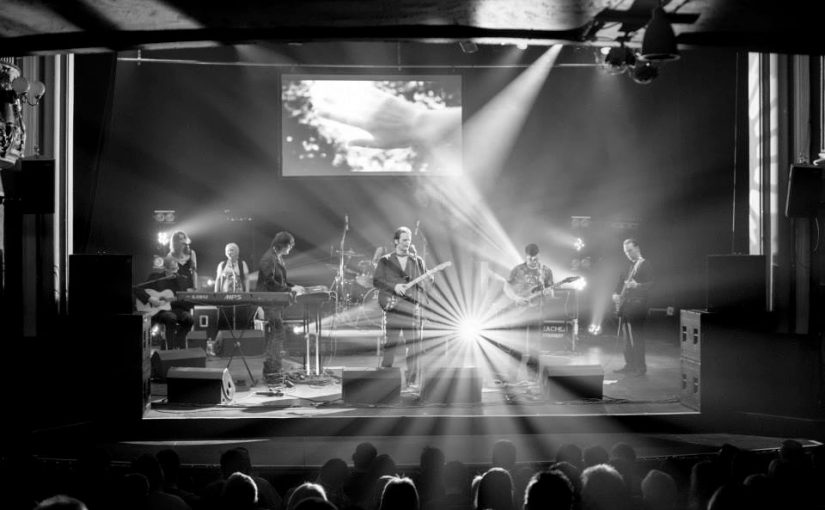 The wallet emptier complained that I’d not done my homework. Where was my review?

Ah… Don’t own a dog so cannot claim that it ate it.

Can’t claim I left it on the bus.

So , honesty being the best policy, I confessed to not having the time to listen – all these new albums venturing out into the world, taking their first steps to fame and fortune and a place in  the queue ( sorry Andy Tillison, I’m sure that’s a copyright infringement J )

So, being a good listener I volunteered to listen to “Aftermath”, the second album from Preacher. I confess I volunteered for this based on having just watched the pilot for the Amazon TV series of the same name and Martin mentioning that they were a bit Floydian.

A Bit Floydian-That’s more music to my ears.

And there are touches of Gilmour and crew throughout this musical book. There are also echoes of Demon too, especially in the vocals.

Keeping up with the Floydian similes, Roger Waters’s influences abound, both in vocal phrasing and in lyrical dexterity.

Preacher– I’m not too keen on the name. Remember all those NWOBHM “ER” bands? No? Exactly. The Urban legend of the curse of the “ER” band name strikes fear in those of us that lived through that era.

But then, Gandalf’s Fist? Spock’s Beard? Who am I to judge a name?  A rose still smells, no matter what it calls itself.

Anyway. Should you buy this album? Do you like a big expansive drum sound? Nice piano playing? Killer guitar hooks and proper solos? You do, Then stop right there. The songs are not long in a ‘Supper’s Ready’ time frame, but they grow and breathe and unfurl over 5 minutes or more. You are taken on a journey with the sound; there are choirs, drums and beautiful soaring guitar lines on the opener that invite the Pink Floyd comparisons.

This is not the slavish cloning of PF, but an Airbag style exploration in that universe. If Hollywood can reboot films, or just remake them and people accept it, then there is more than enough room for Preacher to exist and if they produce music of this quality, then they deserve your money.

Welcome To The Fray continues further into the black hole at the centre of The PF universe, with a rhythmic vibe lifted from “Echoes”, and layered over this is a guitar solo that Mr G would be proud of. This is “Welcome to the Machine” rebooted with even more anger, almost a punk snarl from the vocalist. There is a sense of menace from the way the track builds, I would love to this live as I can picture the band getting locked into the groove and funking it up. Yes, Prog goes funky here, it’s all in the drumming. I’m not a musician, and it’s hard to explain without doing the “sounds like” sketch, but the rock solid groove with the chopping guitar over it, the angelic female voices… bliss. Shame it fades as I could listen to that groove for a lot longer.

The PF ambiance only hit home on the third listen as I started typing this rubbish.

It’s a lazy and almost stereotypical reviewer tactic to list the influences that spring to mind as you want people to relate to where the music you listen to takes you. So let me play join the dots with the tracks

Preacher take me back to my youth, when I was discovering new bands, new albums at a vast rate.

War evokes the band Demon and their album “The Plague”.  It’s the vocals that trigger this memory, resonant and on the edge of a scream, but never out of tune, a classic “rawk” performance. The song grows from a military snare drum, with layers being added to evoke the atmosphere, then that voice comes in. It’s the calm before the storm moment, Imagine “Soldier of the Line” by Magnum meeting “The Plague” by Demon. That’s the vibe.

Hold On is the big ballad. A blast of guitar heroics, very Francis Dunnery in tone and feel, but with that Roger Waters soundscape under it . Another ‘Play Loud’ track.

Vinyl, is a punkier, more aggressive band. All angular guitars and angst gripped emotion. Rallying against the music business might not be a great career move for a signed band , indentured to a multinational conglomerate, but the band are outside of that, like a lot of bands today, forced to “Do It Yourself” It’s not punk , it’s post punk, or “new wave” with an amazingly deep drum sound and more guitars swirling around .

Sleep, if we are playing our “spot the influence” is very Roger Waters / Final Cut , a big powerful song  of desperate longing. I loved “Final Cut” and love this track for evoking it. The protagonist tells of waking from the same dream every night. A dream of “visitors”, his friends that he wants to return. Are They Aliens? Lost loved ones? Who knows?  The beauty of this album is that the words wash over me , I acknowledge them on one level, but it’s the guitar that takes centre stage.. I always was a sucker for a good guitarist. Some might sat a bit too David G at the climax of this track, but I loved it.

Vision is back in the Pink Floyd/ Alan Parsons / melodic universe where the melody is strong and the craft of song writing is not relegated to a pile of repeated phrases and earworms.

The song grows and grows and the accompaniment reflects this. You know that there is going to be an epic guitar break any minute now… there’s a dramatic pause and the song is turned through 90 degrees and we embark on a piano led diversion out into the country before a squeal of guitar drags us back to a funky little place on the edge of prog  town where the band kick up a storm .The coda demonstrates the “chops” of the band nicely with great guitar and piano to the ending choir of joy. Next up, we have Always, a slower, more mature vibe, the drums drive this remorselessly before we all stop, a solitary guitar line then cues the return of the drums and a joyful organ, combining to lay a bed of notes for the long awaited guitar solo . Which delivers? Not in a too many notes to count shredding battle, but in a stark white light, head back, foot on monitor show stopping blast of sonic joy. This I want to see live. I get a blast of Prince, at one with his guitar at the Climax of “Purple Rain”, Francis Dunnery coaxing pure emotion out of his start at the climax of “You’ll Never Go To Heaven” too. It’s a real hair on the backs of your arms emotion.

And it leads us to War reprise – a big slab of guitar setting out the framework for a sonorous vocal performance that is intense and full of depth and emotion. It’s a climatic point, with big Led Zeppelin Levee style drums under a guitar and keyboards piece that deserves to be played loud through speakers, played loud enough that the neighbours can hear the emotion in every note.

This is the big guitar solo on an album that oozes classic guitar shapes and colours. The acoustic guitar is the bedrock of Always. Another strong vocal performance, but I must mention those drums. This track has a real “live feel to the drumming, it add a further layer of flavour that come s from a real band playing in a room at the same time.

There, a lazy review to an album that’s anything but lazy.

The CD arrived today and sounds even better.

One caveat. The track listing is not as per the sleeve or Bandcamp. For reasons that are beyond me, “Sleep”, track 5 on the cover and the Bandcamp page is actually track 7 on the CD. With my Mental map adjusted, I’m now listening to the CD .At Volume. It sounds terrific. Swirls of synthesiser, thumping drums and awesome guitar . Yes , It’s Prog, but with guitars set to stun , Blue Oyster Cult style.