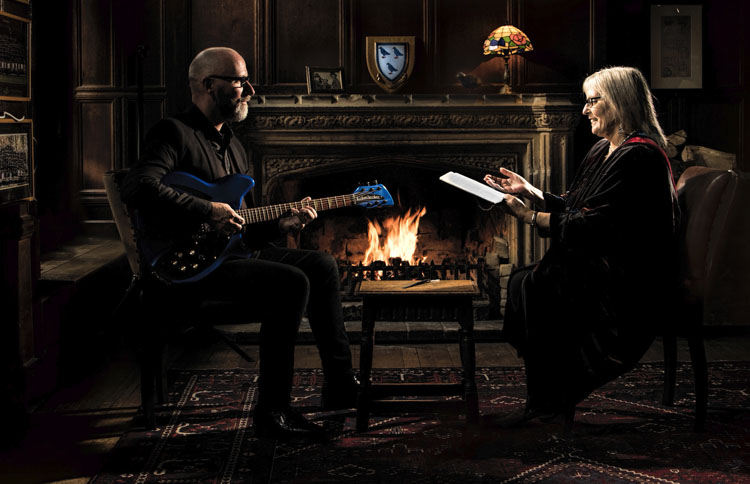 Many of you will be saddened with the cessation of daily routine and life, especially in the area of live music. Big Big Train have certainly had a rough time of all this with their inaugural headlining show at Rosfest in Florida being cancelled due to the virus. During this time David Longdon has not been idle, instead he has been able to complete a rather significant and a very personally special project with Judy Dyble (whose pedigree includes being Fairport Convention’s original vocalist and also being latterly of Trader Horne, alongside an interesting solo career of late). When Big Big Train undertook a run of shows at King’s Place in 2015, Judy was introduced to multi instrumentalist David Longdon and they bonded over their shared love for words and history to the extent that Judy performed a duet with David on The Ivy Gate from the band’s ‘Grimspound’ album and they expressed the desire to work together further at some point.

This new album is a further and, sadly, final chapter to that friendship as Judy passed away shortly after the completion of the album. So this release will be a celebration of that very special friendship and act as both a testament and a tribute to Judy.

‘Between A Breath And A Breath’ is a very fine album indeed, there is a lot of very fine music compositions and sublime lyrics on offer on this release. The artwork by Sarah Louise Ewing is exquisite & sensitive and the photos are lovely and dignified, especially the lovely photo of Judy and her beloved greyhound Jessie.

Of interest to many will be the appearance of most of BBT in some form or another and whilst the music is far more folky than rock, there is still enough punch to bring this into the progressive rock realm, especially on the longer tracks like the epic France and Whisper, both of which are intriguing compositions.

Judy wrote interesting lyrics and she often said strong things within her songs, as evidenced by her scorn for Astrologers who dupe people with their false promises. This song is the first single from the album and it is a great opener with a fine guitar line from Dave Gregory, whose complex playing adds layers of depth to the song. Obedience follows which is a wonderfully expressive track that swoops and soars with David providing an impressive vocal performance, especially on the chorus. Possibly the most powerful track on the album and one on which the BBT influence can be heard the most.

Tidying Away The Pieces is another song that speaks of preparing for death but is still somehow a positive experience. It is a beautiful song, very emotional but not cloying, rather it is practical and decisive. This song made me smile and cry at the same time. Between a Breath and a Breath is the title track for the album and is a duet between David and Judy in which they swap lines to great effect. A subdued song that has a totally other worldly feel to it.

Then we are onto side two of this remarkable record and the lengthy epic track France at nearly eleven and a half minutes. The song is split in two sections linked by a mirror ball dance section and is about impressions captured on a trip to France and the history encountered whilst there, how war came and changed the home again. This is a sombre piece but the music it contains brings great pathos to the proceedings. It is very expressive and has great guitar solo performed by David Longdon, sweeping accordion from Rikard Sjoblom, in fact pretty much all of BBT bring this song to life beautifully and sensitively, a truly magnificent piece of music.

Whisper is next and is another strong  piece, the playing on this track is graceful and full, very satisfying. It rewards the listener with repeated playing, unlocking different nuances as the song plays on. It is about being isolated and left out but still being able to listen.

Final track Heartwashing is a bit different in that Judy doesn’t sing on it but she does speak the words. I gather that illness had consumed Judy by this stage and she couldn’t sing but she did speak with the final lines telling much of the tale when Judy says, “For what will be the next adventure, should there be such a thing…” Sadly it was not to be as she died on the 12th July in advance of the release of the album.

It is an absolute pleasure to be able to recommend this music to you all, between them David and Judy have gifted us with a graceful poignant and touching record that is a fine testimonial to the unique gentle talent of Judy Dyble and one that is brought to life by the great skills of David Longdon, the members of Big Big Train and a few others.

This is an album that you must listen to or you miss it at your peril. I cannot recommend this highly enough, I think it is one of my albums of the year. Indeed the beautiful music and the grace that the album offers make this worthy of a place in any albums of the year listing. Yes, it is that good, truly remarkable in fact!