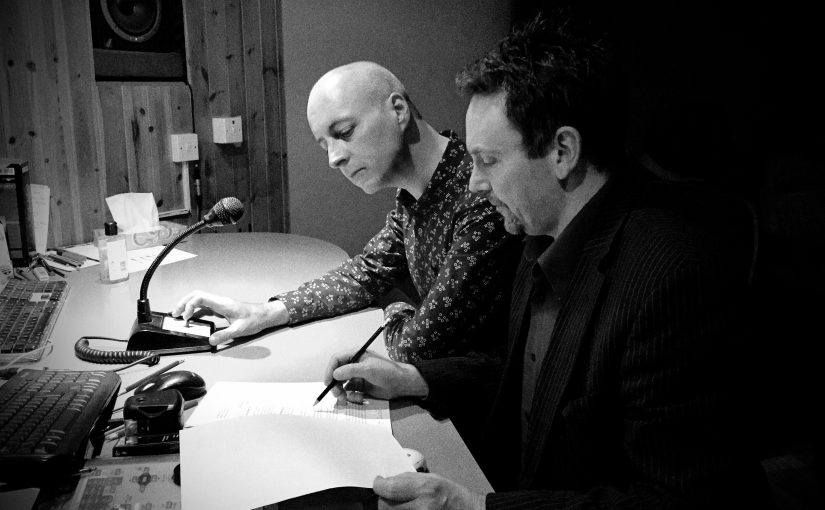 The concept album, in some quarters it’s a dirty word, the worst excesses of the 1970’s, to some they are bloated behemoths all style and no substance.

To others, the concept album is the pinnacle in musical achievement, to paraphrase something Andy Tillison once said to me, “They are the equivalent of a soundtrack where the film hasn’t been made yet.”

The best and most fulfilling concept albums use all the space the record can provide to build atmosphere, layer on layer of dramatic and musical counterpoints and draw the listener in, and most crucially leave them wanting more.

This is what ‘Decades‘, the new project by acclaimed singer/songwriter David Palfreyman and actor/director Nicholas Pegg (a highly renowned David Bowie expert, and a Dalek in Doctor Who) does. Across four acts and 20 songs (one whole double album, yes it’s available on vinyl, as well as CD and download) it tells the story of the mysterious Kelver Leash as an old man, looking back over his life of fame and fortune.

I had an email conversation with Nicholas and David about the album, which you can read further down however before that, here are my thoughts on this ambitious release.

The beauty with the story is that it’s ambiguous enough for you to put your own interpretations on who and how Kelver became famous, and the musical backdrop fits the whole back story, with the styles and sounds genre hopping and crossing the genres and decades with verve and aplomb.

Some albums which blurs genres and sounds can seem contrived or forced, not ‘Decades‘, the way each song evokes a particular era, and is used to tell Kelver’s story is well thought out, and works perfectly as the acts move on.

With some sublime spoken word dialogue, and an astonishing cast of actors, with character actor David Warner (a name familiar to fans of British horror, and one of the finest actors of his generation) playing Kelver in the present day, and the scenes between him and his agent played by the incomparable Jacqueline Pearce, absolutely crackle with dramatic tension and personality, and the they bounce off each other like they are having a ball.

Kelver as a young man is played by Richard Coyle, and as he is living the celebrity life old Kelver is looking back on, he walks through the play like he owns the stage, a knowing wink here, and a twinkle in the eye throughout, whilst it’s talented newcomer Edward Holtom, who plays Kelver as a young boy that adds to the back story.

With Jan Ravens (Dead Ringers, Spitting Image) playing Jemma/Kelvers Mother and the mysterious Lady Blue, she gets to use her dramatic talents to the full, and the versatile voice artist Simon Greenall (Benidorm, I’m Alan Partridge) plays the roles of 60’s TV news reporter and 1970’s chat show host with aplomb and absolutely authentic to the era that Kelver is reminiscing about.

When you have a cast of actors as strong as this, it’s a case of either go hard or go home with the music and performances, and as the concept grew organically, it doesn’t put a foot wrong musically, covering all bases and all era’s, from the wonderful theme to ‘Decades‘, with it’s fantastic groove and sax sound, to the brilliant There Goes my Darling, with Mitch Benn providing a wonderful lead vocal.

In fact the vocalists and musicans on here are top notch, you have the powerfully soulful Sarah Jane Morris (whose duet with Ian Shaw, Kick On, brings to mind that big show stopper sound of the late 60’s, with Shaw (awarded best singer at the BBC jazz awards for two years) bringing his best Tom Jones to the table. Morris also shines on the albums lead single, the powerfully poignant All Fall Down.

The wonderfully wistful Faraway Day is sung by Jessica Lee Morgan, another powerful female vocalist (whose parents happen to be Tony Visconti and Mary Hopkin). Whilst David Palfreyman showcases his impressive vocal talents on Dead End Morning and Love you ’til Burn Out among others.

The hauntingly beautiful Lady Blue, with it’s beautiful guitar work, and gorgeous vocals is sung by Eliza Skelton, who also contributes vocals to the darker and more intense Blue Requiem, two songs that perfectly contrast each other.

Each vocalist has been hand picked for the songs and with talents like Cassidy Janson’s vocals on the fab Eyes Wide which draws on the best electro pop, and in the tradition of the greatest electronic songs has a wonderfully metronomic beat and powerfully soulful vocals, and Beth Cannon (Escape to Dream, Who knows what is true? Full Circle & Broken Trend). As an aside, there is a name familiar to us all, occasional Oliver Wakeman vocalist, the wonderful Paul Manzi cropping up on backing vocals, no expense has been spared, and this adds so much depth and soul to the album that it is a joy to listen to.

There is an amazing music collective performing on this album, and Palfreyman and Pegg prove themselves adept at bringing together a powerful ensemble to give each song the performance it deserves, with the cream of the musical crop bringing their all, special mention has got to go to the saxes of Gary Barnacle (who also provides wistful flute work), Terry Edwards and John Fordham, as the sound of a sax solo always sends a shiver down my spine and keeps me listening.

All Fall Down, as mentioned earlier is one of the tracks on the album, and it encapsulates the story in a nutshell for me, and is an astonishing piece of musical beauty, and the video is also worth a watch as well.

Who is Kelver Leash? I have my ideas, but I will let you make up your own mind, as the beauty of this record is that like all the best books/plays/films/records treats us as grown ups and allows us that space to fill based on our interpretation and imagination.

The way the music and the story intertwine is a lesson in the art of how to make the concept album work, this is ambitious, this is bold, this is well written and executed, and most of all, this album is an absolute delight from start to finish.

Nicholas Pegg and David Palfreyman should be applauded for the way they have brought this concept from paper to production, as well as perfectly matching every song to a unique vocalist and getting the casting perfect, as you can’t ever underestimate what Warner, Coyle and Holtom bring to the role of Kelver. This is one of those classic records that keep pulling you back, and one where you get something new from every listen.

This is how concept albums should be, and is for me one of the albums of the year.