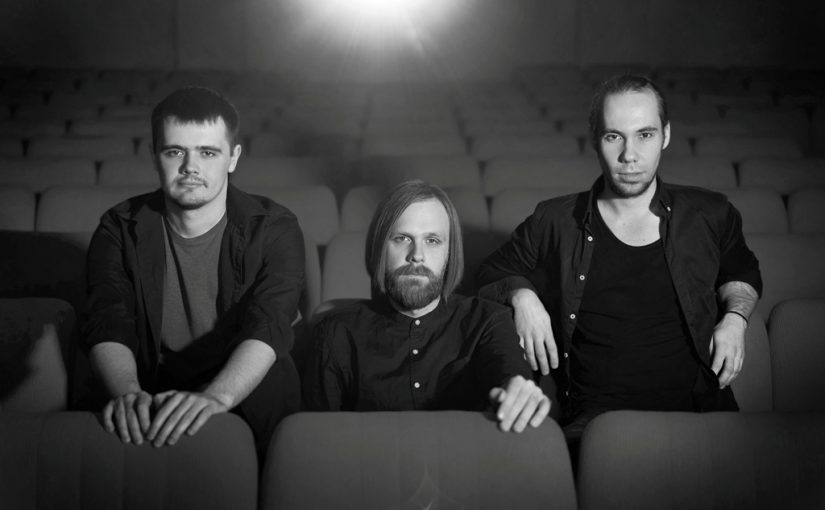 As some of you well know I do like  a bit of instrumental progressive rock. I find that without the words, the music takes on more meaning and you can lose yourself in a myriad soundscapes where it is you, the listener, that creates the story in your own mind.

One of the excellent instrumental bands I have the pleasure to know is the Russian trio Echoes and Signals. The band, consisting of Fedor Kivokurtsev (guitar), Alexey Zaytsev (bass) and Yaroslav Egorov (drums), were formed  in 2012 in Tula, The Russian Federation, as an instrumental trio. They play music influenced mainly by post-rock and progressive rock elements.

Originally Echoes and Signals was formed just as an improvisation playground for the founding members, but then it turned into a real project. Their first 4-song EP album called ‘Comma’ was released in July, 2012 and was followed by ‘Ouroboros’ in October 2013 and then the band’s first full-length release ‘V’ in November of 2014. (All live photos by Pavel Chesalin)

2017 sees the band return with their second long player called ‘Monodrama’. The concept of the album goes like this:

“The songs of ‘Monodrama‘ are dedicated to insights, memories, unresolved situations, inner dramas, fantasies, and dreams expressed through music. It’s a collection of soliloquies ‘spoken’ aloud in order to build self-knowledge and awareness; the different dots of our inner mind-map connected together are creating a brand new system and a brand new motion.
We all travel through time guided by the inner light — and realizing that the motion itself is much more important than the destination is the key.” The album opens with the enigmatic Saltwater, a chilled, laid back number that lets you join the ride at an easy point with a great bass line and dynamic drumming. The guitar guides you around the imaginary land that your mind is already concocting and the tempo increases with some added urgency. Stylish and with a decided touch of class about them, Echoes and Signals have matured rather well since their last outing. Ocean has a real lightness of being to it’s composure from the very first note. There is a real deftness to the guitar note, a delicate step as each note progresses to the next. You can detect a fluidity to this song as it segues from each section to the next. Once again Alexey and Yaroslav provide a superb rhythm section over which Fedor can lay his excellent guitar lines and you just end up letting the music flow over and around you, serenity in musical form.

There’s more of that feel-good atmosphere throughout Station Horizon, a track with powerful dynamics but with a real upbeat tone running at the core. You feel as if you are on a fats paced journey with the band’s collective feet hard on the gas pedal. A joyous tumult of musical ideas that are never less than excellent but always have a smile on their faces (if they had faces obviously!). There are some great, tight & frenetic instrumental runs that add further to the enjoyable ride and I’m left with a big grin on my face. Bring the excellent voice of Marjana Semkina into the equation and things get more dramatic and emotional. Her soulful and touching vocal adds a really serious overtone to Lead Astray and the musical takes on a different feel, this time as a backing to Marjana rather than being the lead. It’s a subtle distinction but it’s definitely there and it produces a brilliant ying and yang of the elfin like qualities of the vocalist and the powerful dynamism of the band. It’s a mesmerising track that draws you in with some superb instrumental passages as well as the stirring vocals and gives pause to where the band see their future. A short and thoughtful sci-fi tinged track, Farewell Centauri is quite melancholy  and nostalgic in feel and left me feeling somewhat wistful and reflective as it came to a close. Veins opens in a pressing and compelling manner, the edgy guitar, bass and drums having a skittish tone. It then opens up into a funky, acid jazz jam from outer space and I wouldn’t be suprised if this track was a load of fun to play live. The bass and guitar play off against each other and the drums drive everything along with an obsessive beat. Fedor throws in some fiery, emotive soloing to complete what is a very inventive piece of music.

Ethereal and haunting, like a musical daydream, Magnolia is just a beautiful track that feels like a modern classical piece. The guitar almost speaks to you with its plaintive and thoughtful timbre and the subdued drums and stylish bass just add real pathos and emotion. The song opens up into something more powerful but never loses that contemplation, almost questing for more and searching for answers. Skymap carries on with the thoughtful, challenging feel that pervades the whole album and has a composed and laid back opening where the music just dances along, as you move further along this musical journey it begins to ask more questions with a pressing and very catchy guitar motif that I particularly liked. The inquiring mind carries on in intricate fashion with some convoluted sections, studious and introspective. It is, on the whole, a really intelligent and inventive piece of music.

The final track on the album is the nine-minute plus To The Lighthouse and is a superb ending to this excellent, mostly instrumental, musical tapestry. A sombre opening leaves you engrossed and contemplative, a more serious overtone then follows. It’s almost like an elemental force strides across the soundscape, not evil, just curious and not understanding of our world. The music has different shades of light running through it, from the light though to the resolute and you are a willing passenger on the quest, feeling each transition transfixing your soul. This song is an utterly mesmeric musical voyage into the unknown, who knows where you will arrive.

Once again I am entranced by a great instrumental album release. Echoes and Signals produced something impressive with ‘V’ and, to my ears, they have just raised the bar again. With a new found confidence and maturity to their music, there are no boundaries to where they can go and I for one will watch their journey with interest. ‘Monodrama’ is another great musical export from Russia and it is one that everyone should be listening to.