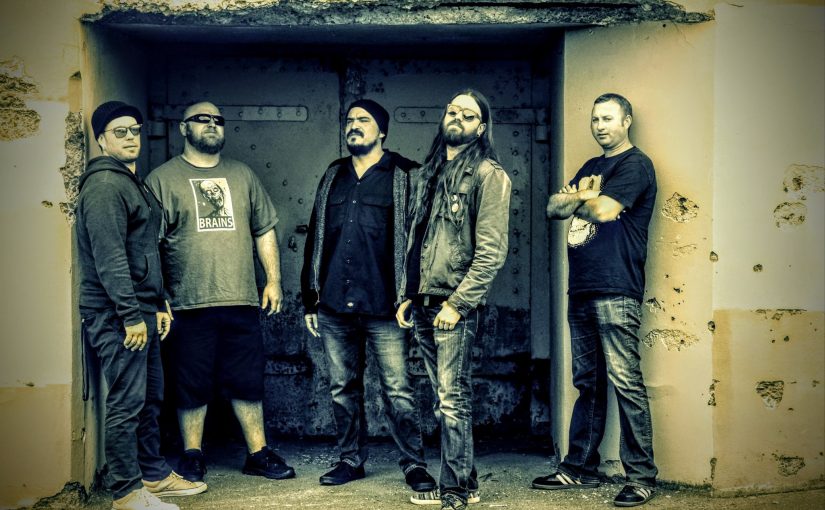 Music that we review here comes from many different sources, be it record labels, public relations agencies, friends or even fellow music reviewers. If it comes from the latter two then you you can bet it is because the person who has tipped me off to the artist is a passionate supporter and wants recognition for these fledgling bands.

For Concord, CA. band Arkaen it was an old friend and colleague from my days as a reviewer at Lady Obscure Magazine, RJ Dunn who pointed me in their direction  and, boy, am I glad he did.

RJ describes them as: “… a hard rock/ Tool kind of band, very solid stuff…”, and that was definitely enough to pique my interest.

The EP opens with Innocence and a funky bass line that draws you in before the twin guitar leads hit you with an edgy riff and Uri’s emotive vocals begin. These guys are extremely tight and technically proficient. The music has a proper mountain moving heavy vibe to it without going too far in the thrash direction that I’m not particularly fond off. The song builds on its foundations creating a solid wall of sound along which Uri can weave his intensive vocal magic, as a taster for the rest of the EP it’s nigh on perfect.

Again that ever stylish bass of Eli is the opening for When We Fall and it is followed by a riff hewn from granite, properly heavy indeed. The guitars provide a backdrop for Uri to hit you with the full force of his vocals, he has a great dynamic range. I feel like I’m listening to Metallica when they bestrode the metal world, these guys definitely have something about them. There’s a funky, edgy chorus and some cookie monster vocals that are followed by a burning solo that scorches across the track like the Fifth Horseman. A really enjoyable track full of heavy and thrash metal cues and one that left a smile on my face.

The next two track are longer, both coming in at over seven minutes, and even touch on progressive metal tendencies. Bass line to introduce Just Another Lie? Yep, you got it! The song builds slowly with another leviathan crushing, monstrous riff and I can definitely hear the Tool influence on this track. Dark and dangerous, it takes no prisoners and brooks no arguments. The vocals are brilliant, Uri has touch of Bruce Dickinson about him in places and his voice appears to come from the very bowels of the earth. The driving force behind the song is the excellent rhythm section of Eli’s bass and the dynamic energy of Sean Henson behind the drum kit and they allow the thunderously expressive guitars free rein to provide an amazing sonic assault that knocks you flat before picking you up, dusting you off and then doing the same damn thing to you again. Are you complaining? are you hell!! There’s an anthemic glee to the song that is hugely addictive and it just flies by before coming to a slow burning close, epic!

The final track on the EP is Gleam and it opens with an almost pop music keyboard note that caused me to raise an eye brow before normal service was resumed with a tectonic plate shifting riff and uptight vocal, backed by some highly strung guitars. The riff that follows is as funky as hell, almost as if Chic decided they wanted to cover a Megadeth track and really worked for me. The earnest vocals on the verse are backed by the excellent musicians but its the earthy chorus that really impresses on this song for me. The twin guitar trade- offs between Joey and Garey are really addictive and the solos they play are scintillating and note perfect. Another impressive song from this quintet that shows they have a lot to offer in the future.

What you get from Arkaen is seriously professional musicianship backed by solid songwriting that grabs your attention, immerses you in the music and makes you want to listen to the whole EP over and over again. Heavy riffs, compelling vocals and rhythm section to die for, what more could you ask for from a debut release?