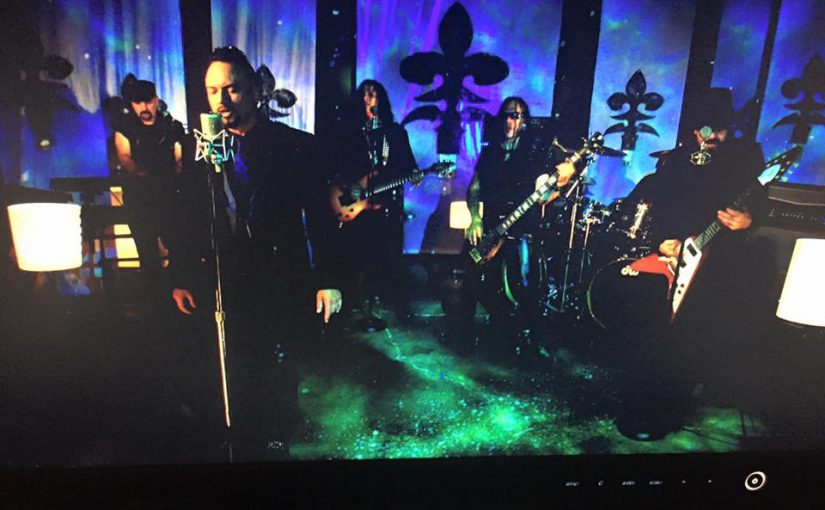 I came across Queensryche whilst serving alongside the U.S. Forces among others in The Netherlands, where I bought the ‘Operation : Livecrime’ box set from the PX. The video was an excellent concept and I enjoyed it so much that when my video player died I bought it on DVD. I bought their back catalogue and traced the progression in their sound and Geoff Tate’s voice. I then bought ‘Empire’ which for me was the pinnacle of their recordings.

None of the others since have been particularly bad, ‘American Soldier’ being worthy of note but they never seemed to match either ‘Mindcrime’ or ‘Empire’. Then came the acrimonious split and albums from both parties. Traces from both of old successes but again nothing outstanding. I stopped at ‘Kings & Thieves’ and didn’t buy ‘Frequency Unknown’ or ‘The Key’ from Geoff’s new band Operation: Mindcrime , which was part one of a trilogy and quite badly mauled by the press.

So when I was asked to review this, the second of the three part story, I wasn’t sure what to expect. The old logo is cleverly reworked into the cover design which looks like a panel from the page of a graphic novel, a good start, but what is the concept? Who better than the man himself Mr Geoff Tate to explain, “It continues the story that began on the first album ‘The Key’ with the near death experience of the lead character known as ‘H‘ and his subsequent recovery of the missing encryption key. With the Key finally in his possession, ‘H‘ has everything he needs to finally launch his long awaited project called ‘The New Reality’. Or does he…” Intriguing sound effects, introduce the short, opening instrumental piece and title track ‘Resurrection’, which then slides into track two, ‘When All Fades Away’, a heavier more majestic piece of instrumentation which seems to imply the beginning of, or preparation for, a journey in it’s tone. Seguing into the thirty second track ‘A Moment In Time’, where Geoff Tate’s vocals make a brief introduction before we find ourselves ‘Through The Noize’, on the next track. Whilst Tate’s distorted vocals (similar to those used on previous recordings) are meant to impart a certain atmosphere, for some reason they seem to ‘muddy’ the sound on this recording and I have to really listen to understand the lyrics.

Whilst not classic Geoff Tate he appears to be moving forward has gathered a worthy band of musicians/vocalists to ably assist him so he’s not ‘Left For Dead’ yet, as this fifth track leans toward the ‘Queensryche’ trademark sound with memorable chorus. The lyrics indicate a fighting spirit, knocked down but undeterred he will rise and push on as he leads out with ‘It’s all I know….’

Most of the lyrics seem autobiographical and can be listened to as a continuation of Tate’s dislike for corporate/political improbity and corruption bought from excesses of wealth. Yet at the same time it could be viewed as a personal reflection of the last four years, since the acrimonious split from his former band mates in most unsavoury fashion have at times left him feeling ‘Miles Away’. The tracks seem to grow in stature along with Tate’s confidence and the selected performers are allowed to show their various talents, flourishing guitar solos and the drums in particular standing out here.

‘Do you think he knows?’ a question Tate feels ready to answer as he sings ‘Healing My Wounds’, and brandishes his trusty sax solo on this album for this first time, (an instrument he under-uses in my opinion), which brings a different flavour to the sound and soaring guitar adds to the orchestration creating an epic feel. ‘I think he knows’. The laid-back retro-‘ryche delivery on the eighth track belie ‘The Fight’ the man has been waging on all fronts. Acoustic finger picking intro and Geoff’s beginning to feel less reason to look backwards and a growing recognition he’s able to not only stand on his own terms but also that he’s free to explore avenues that may not have been possible within the band collective. He seems comfortable with this song, like a familiar snug blanket and let’s hope Tate’s not shy of using the old sound mixed in with new ideas to progress himself.

Tate may have had the impression at times that he’s ‘Taking On The World’, but he seems to be coming out on top with the best track on this album unashamedly channelling his inner ‘ryche, which echoes staple tracks like ‘I Don’t Believe in Love’. Whilst the voice is used a little more economically these days as age does it’s duty on the vocal chords, he is still on fine form and sounds as if he’s really enjoying himself for the first time in a while and finding his path forward. Again the musicianship as on all the tracks is excellent. I particularly like the introductions on each track as they add to the atmosphere.

I’m not sure Tate feels ‘Invincible’, but with his confidence asseveration on each track, number ten sees him facing off against his demons sensing he holds the key to his resurrection and growing stronger with each breath.

The heavier, bluesier ‘Smear Campaign’ wears it’s heart on it’s sleeve and the thin veneer of the concept fails to fully cover the most blatant of all the tracks to raise the bitter taste in the musical throat, on the thorny subject of the last four years. With cries of  ‘What’s the point, easy target’ and ‘People will either love you, or hate you’ among the lyrics it’s not a giant leap to see the real pain. Yet with shifting time-scales and changes in tempo it also showcases once again, the excellent musicians he has surrounded himself with and teases us with a brief but delicious slice of Geoff on sax and building into a dramatic finish.

As in any conflict you find at some stage you will be asked ‘Which Side Your On’, (it’s the way it was spelled on the review copy I was sent) as Tate appeals to anyone listening and rallies support for his cause. Unfortunately this seems to lose cohesion, sounding  more indistinct. For me this could have been left off the album as it offers nothing and causes the album to stumble a little and lose it’s way. The penultimate track offers Tate ‘Into The Hands Of The World’, and is probably the riskiest track on the album as it juggles genre, mixing brass with heavy guitar riffs and twiddly keyboards along the way and whilst once again it doesn’t hold a consistent earworm of a tune it is more palatable than it’s predecessor and leads us to the grandiose platform for the last track.

Tate addresses you ‘Live From My Machine’, recovering the album and finishing in majestically, relaxed style. ‘It’s always a challenge, facing the challenge’, he sings in acknowledgement of what he has achieved on this album.

It may not reach the dizzy peaks of past triumphs but ‘Resurrection‘, sees Geoff Tate climbing in the right direction and with conviction to greater heights and building empires.

(I can only hope the sound quality is better on the actual release.)

Buy ‘Resurrection’ on CD from Amazon