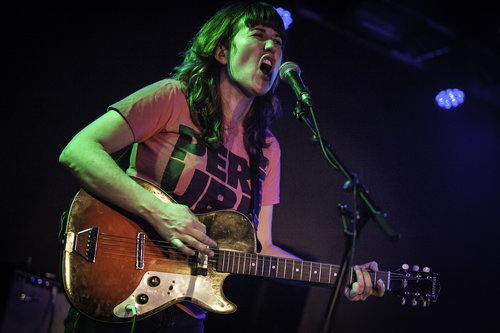 US singer-songwriter and former fisheries biologist, Anna Coogan is excited to announce her return to the UK on tour following the release of new record The Lonely Cry of Space & Time, including a show at London’s Sound Lounge on Thursday 19th October.

Take a listen to single Burn For You taken from the recent album:

The album, a virtual two-person effort which features Willie B (Brian Wilson) on drums and Moog bass, combines Coogan’s three-octave soprano vocals, electric guitar soundscapes and pointed social commentary into a fierce cohesive piece which combines the personal and the political, in a musical hybrid of rock, country, pop and classical opera into a unique whole. Her new direction was born from her series of performances in her adopted hometown of Ithaca, NY, in which Anna and Willie B created live musical accompaniments for vintage silent films.

A true independent, Anna releases her own albums and books her own tours, which have taken her all over the world, including international festivals like the Blue Ball in Lucerne, Switzerland, Maverick in Suffolk, UK, as well as the Glasgow Americana Festival and Celtic Connections in Scotland. She has also played extensively in Germany and the Netherlands, and toured as a member of the Johnny Dowd Band.