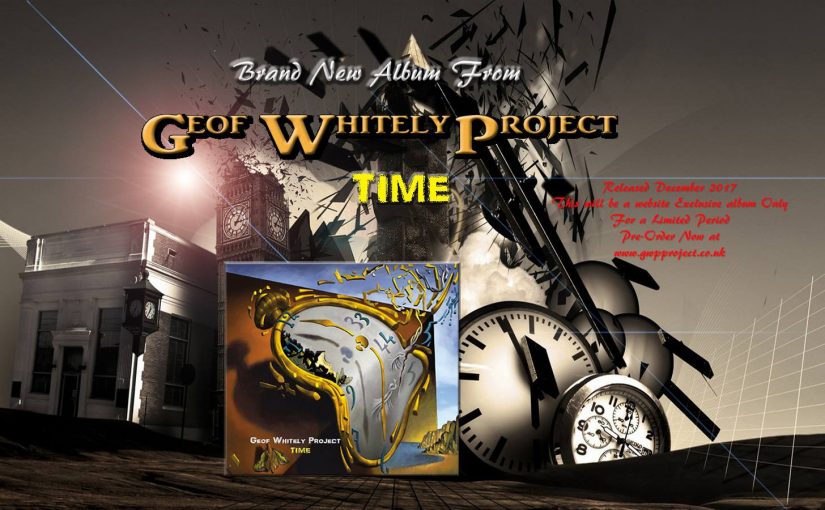 He’s a prolific fellow that Arny Wheatley, the creative mind behind the Geof Whitely releases an astounding amount of new albums, surely the quality will have to dip at some point? Well it hasn’t since I got involved with reviewing the releases and December will see the latest record from this musical project see the light of day.

In a break from the norm ‘Time’ will only be available in CD format and exclusively from the website only in CD format and a limited edition of 300. In a further change to the standard format, this album is shorter and features only 6 tracks.

We start with the dark and atmospheric Deadly Alliance. That signature base sound is present and correct but, carrying on from the slight deviation we heard in ‘The Blessed & The Damned’, Arny adds some subtle nuances. The keyboards and resonating guitar add a real sombre note and serious tone, it’s a great direction to take. A tasteful piano introduces Stay before the yearning vocal joins in. A wistful and slightly melancholy song of hope  and one that sees yet another sonic string added to this talented musicians bow. Within the loose strictures of the recognisable Geof Whitely Project sound are now thrown some really interesting variations and it works very well.

Title track Time has a seasonal, festive feel to it as it begins with its bells and horns and exudes a feelgood aura. Arny’s vocal adds some seriousness and authority along with the powerful guitar and dynamic drums to replace this almost pastoral tone with something a bit more rock influenced. An effective and compelling piece of music, it holds your attention as it takes its measured strides along a vibrant musical journey. Sometimes sees that contemplative and thoughtful feel return, the vocals have a pensive edge and the keyboards give a wintry sheen to everything. A polished and reflective song that certainly left me reflecting on my past, there’s a real maturity to Arny’s songwriting that is pretty evident on tracks like this.

An elegant guitar and reflective keyboard open Runaway Express before a heavier guitar stirs things up. The emotive vocals grab you straight away with their really meaningful delivery and give the song a thoughtful and determined mood. The occasional lighter feel of Geof Whitely Project albums has been replaced by a more serious and sober intent which is highly evident on this cultured and stylish track. All too soon we come to the album closer Out of Touch and Arny throws another little curveball in with its Floyd-esque intro, there’s intelligence and some not inconsiderable subtlety in the songwriting on this album and it manifests itself perfectly on this track. Measured and brooding in delivery, both the music and the vocals have an earnest honesty to them and make for a compelling listening experience.

‘If it ain’t broke, don’t fix it’ but, as Arny keeps showing us, that doesn’t mean you can’t make little improvements to every release to keep on improving your music without losing its original identity. I personally think ‘Time’ sees the Geof Whitely Project at the zenith of their creativity so far and am intrigued to see where Arny will go next!