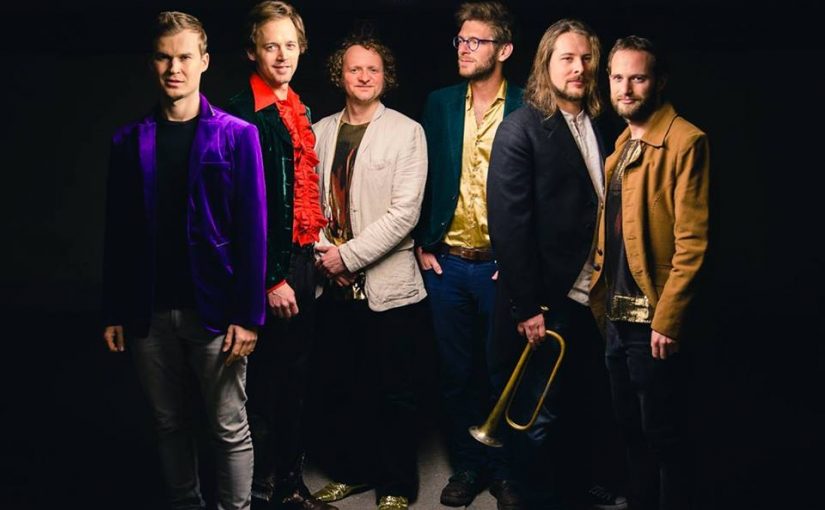 The wallet emptier’s influence reached through time and space to deliver a veiled threat.

“I’ll send you a CD if you review it within a week.”

As I’ve been away from the typewriter for a while, I accepted the challenge and tonight the CD was sat waiting for me to take my first lesson. The CD itself offers no clue as to the contents.

Remember the fun Led Zeppelin had with their 4th album – no name, no catalogue number, no clue as to the wonders inside the sleeve? Well, as I listened to the opening track, a veritable funky mix of Ozric Tentacles and Gong, I examined the sleeve for clues.

The band may or may not be called Blank Manuskript.

The Cd may or may not be called ‘The Waiting Soldier’.

The band may or may not be German (they are Austrian – Ed.)

The first track, as I said is wittily called The Introduction and it does just that. It opens to an unfurling synth sound that put me in mind of Leftfield before a crisp drum sound and a very Gilmour guitar tone – the track then throws a flute in the mix and proceeds power this along at a cracking pace. The guitar, flute and drums with the synth burbling behind it all hones my comparative glands – Ozric Tentacles! Then the vocalist forces his way in, and the track dynamic changes to a menacing almost punk feeling, with some great synth playing to further blur the genre comparisons.

The slide guitar playing is beautiful and the vocals are another layer on top – Punk Floyd?

Public Enemy is next, starting with picked electric guitar, and mellotron , all good Prog styling , with powerful riffs and drumming alternating with the plucked guitar, almost classical in places. Remember Nirvana and that grunge cliché of quiet, loud, quiet that was prevalent? Well this is the sonic equivalent, as we are taken off into several rooms at speed during the first 3 minutes of this track, finishing in a funky clavinet sound on top of all the guitar and drums.

But as I’m learning with this album, the tracks twist and turn, reshaping themselves as they progress. The vocalist appears, sounding quite cross about something or other, not at all happy about having his dreams take away.

Kites To Sky is a slower, more thoughtful piece with some fine guitar blasting over a brass section. A certain south coast Rock ensemble have got a lot to answer regarding filling the soundscape with Brass! The child like vocals ad a nice juxtaposition and fit the slightly dark dreaming vibe.

Dreamlike is not a description that would apply to Doubts with its forceful angular guitar and honking saxophone. This calliope of sound is best described as Madness playing Hawkwind at a Gilbert and Sullivan convention! The wide choice of instrumentation the band employ adds a slightly menacing surreal feel to this track, as glockenspiel and flute carry the tune ever onwards, before falling over the cliff edge of the end of the track.

Next up, haunting strings and a bell slowly ringing introduce The Night , the sparse musical poem slips around the ears as the strings give way to a sustained keyboard sound, very atmospheric and serves as a perfect table for the guitar to build the framework that the spoken words of the narration are spread out for the trombone to examine. This is my favourite track so far. Pink Floyd meet Nightmares on Wax with Groove Armada providing the bridge into a hauntingly beautiful synth solo, again very Rick Wright in terms of the amount of emotion in the playing. The vocals appear, and the Floyd comparisons are justified as the track continues, the keyboards swelling and dominating the climax

The vocals are almost another layer of instrumentation as they are lost deep in the mix as the track concludes. Conclusion seems to have too many words for the tune and some frantic guitar strumming. The opening rant gives way to a fine walking bass, with guitar and drums that appears, then disappears just as rapidly. More words tumbling out but at a more regular speed now. This album has a very retro feel to the instrumentation, with a Hammond swirling away here, driving the song onwards to the saxophone and Hammond duet middle part. Almost jazz blues here, a late night jam session at Ronnie Scott’s between Dick Parry and Jon Lord with some fine drumming, more Cozy Powell than Bill Bruford , but the drummer knows his way around the kit, with some nice flourishes in the background as the sax and organ battle it out.

The track then segues into Cloud via a sustained organ chord, creating an eerie, almost Hammer House of horror mood. The Saxophone now swoops and pecks menacingly at the layers of keyboards, and they film soundtrack seems to be indicating a threat to the hero / heroine whose voice is buried beneath these layers. So now we get disembodied voices, a choir of demons and those long-sustained chords are menacing enough without them. The scene fades to black, no climatic ending here, but a hiatus before a piano and snare drum return as a coda, almost disconnected from the rest of the piece. This is a short album, just shy of 40 minutes, but it is full of big sounds, ideas by the bucket and some fine musicianship.

I am going to invent a genre for it as peopled like to know which box to put things in, so sit down, pour a lass of a dark red liquid (wine preferably) and immerse yourself in the strange and slightly disturbing world here. Cinematic Post Gothic Prog. That sums it up.

Right, I’m going to listen again. It’s worth it.

I described this as “Punk Floyd” and that sums up this album nicely. Check it out. Because you’re worth it too.