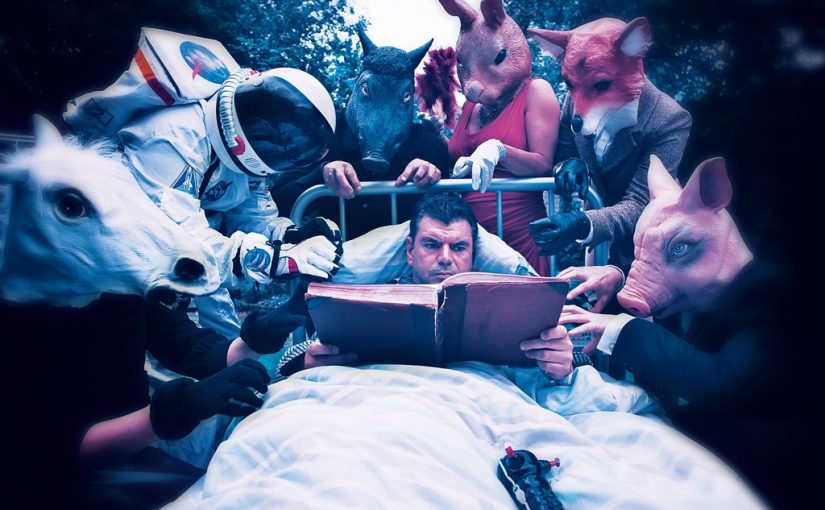 These spoken musings of an unidentified philosopher about sleep and death permeate the instrumental cinematic opening sequence Prologue (Deep Sleep) of Lonely Robot’s second album ‘The Big Dream’, and atmospherically sets the scene for an album which considers our mortality. Lonely Robot is a solo project from John Mitchell, renowned as guitarist, producer and vocalist with bands such as Frost*, Arena, It Bites and Kino. ‘The Big Dream’ is more reminiscent of Kino than It Bites, but such is the excellent quality and imagination of the ‘Lonely Robot’ project Mitchell has arguably now created material which surpasses the achievements of his time with either of those bands. Following on from Lonely Robot’s impressive 2015 debut ‘Please Come Home’, which featured a range of guest artists, in ‘The Big Dream’ John Mitchell takes on all the vocal, guitar and keyboard duties to great effect, alongside his Frost* band mate Craig Blundell on drums.

‘The Big Dream’ once again showcases Mitchell’s strong song writing and distinctive fine guitar style, but also shows his excellent keyboard work throughout this musically dynamic album. Whilst this is an album of ‘Big Ideas’ it is largely expressed in a series of accessible and polished rock songs, alongside some more progressive cinematic passages. For John Mitchell the song is key and whilst he undoubtedly has the musical chops he is not about indulgent technique, preferring songs punctuated with memorable hooks and riding along on waves of melodic progressive rock, such as the ‘earworm’ song Sigma and it’s heroic sounding refrain.

Similarly to ‘Please Come Home’, once again the album has a science fiction context – not a concept album as such, but with recurring themes and featuring the central character of ‘The Astronaut’. However, whilst the previous album was largely associated with Space it appears in ‘The Big Dream’ The Astronaut wakes from a cryogenic sleep in a strange woodland. There are peculiar hints of a space age Shakespeare’s ‘Midsummer Night’s Dream’ with the gentle pastoral prog pop of Floral Green, featuring some delightful vocal dexterity from Mitchell, presumably supported by Kim Seviour (ex-Touchstone) on backing vocals. A short expressive guitar solo over sensitive keyboards skilfully  illustrates this delicate number… sometimes less really is more. In contrast Everglow blasts in like some sort of sci-fi movie spectacular with powerful, driving guitars intertwining with sparkling, pulsing keyboards, whilst Craig Blundell provides a remarkable drumming masterclass to drive this impressive highlight of the album along… oh, and Mitchell throws in yet another short but golden guitar solo before we rejoin the thunderous refrain and heavy curtain of sound that introduced the song. If that’s not enough we then segue into the lighter, dreamy and appropriately shimmering False Lights, in which Blundell initially shows a much more subtle side on percussion, before it builds in intensity and then recedes in echoes. Symbolic, is rather insistent, perhaps lacking some of the subtlety and in my view somewhat interrupting the flow of the cinematic sweep of the latter half of the album, but it’s still a trademark Mitchell finely honed rock song… which is no bad thing!

In 2016 John Mitchell released under his own name an E.P. called ‘The Nostalgia Factory’, featuring four cover songs (which is well worth seeking out). ‘The Nostalgia Factory’ included a fine version of the Phil Collins song Take Me Home and it sounds as if The Divine Art of Being has distinct echoes of that great anthem… which is a good thing! John Mitchell certainly knows how to pen a song with great melody and choruses that resound around your brain like The Divine Art of Being, a song which also highlights the great quality of his voice, perfectly suited to his pitch and intonation. The Big Dream feels like the finale of the album and projects us into spacey, epic Floydian territory, reminiscent of A Godless Sea on ‘Please Come Home’. The Big Dream is widescreen in nature with a wall of grandiose, cosmic keyboards echoing the intro of ‘Awakenings’ over which a wonderful high pitched guitar swoops eerily. This is spectacular stuff which feels like a film soundtrack. As this evocative track closes the philosopher returns with his spoken musings on death and sleep and then in a direct link back to ‘Please Come Home’ we hear the strangely heartbreaking lines:

After the drama of The Big Dream there is a sense of release and optimism as the coda song Hello World Goodbye is like musical sunlight breaking through the clouds. A piano plays a simple melody before Mitchell’s almost whispered soft vocals resonate with optimism, beautifully backed by Kim Seviour, and Mitchell pours a lovely soaring, rippling but subtle guitar solo over the conclusion. Epilogue (Sea Beams), with it’s title hinting at the tragic replicant Roy Batty from ‘Bladerunner’ (the ultimate Lonely Robot?) is a delicate ending, feeling like the end credits for a movie. The elegiac whistle like sounds underline the nautical but cosmic connection and underlines the emotion at the core of this remarkable album. John Mitchell has released a remarkable album which subtly conveys meaning and depth with accessible and finely written songs.

The juxtaposition of machine and emotion in the ‘Lonely Robot’ project is peculiarly touching, and one wonders if many of us lead similarly robotic, regimented lives, not knowing how to escape or truly express our inner feelings…

‘…That’s such a curious thought…’