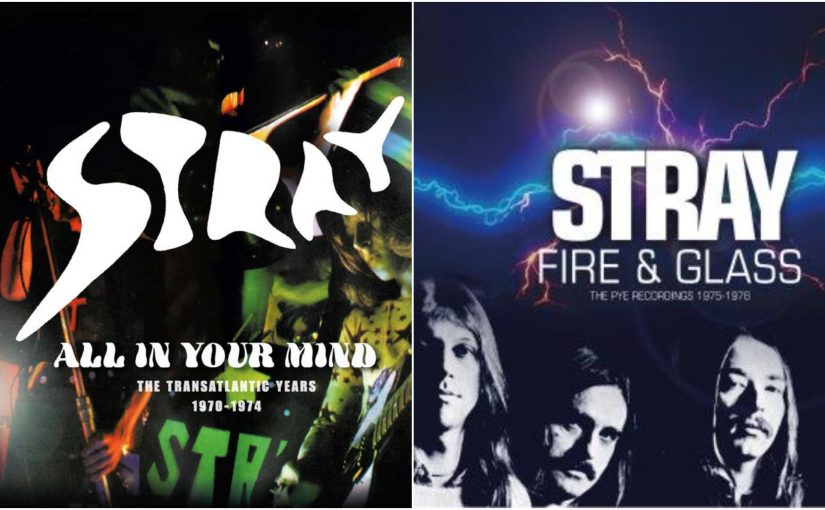 Across these 6 discs and two sets, one a four disc box and one a double disc set, Esoteric Recordings meticulously collects together the 8 albums (‘Stray’, 1970, ‘Suicide’, 1971,‘Saturday Morning Pictures’, 1971, ‘Mudanzas’, 1973 and ‘Move It’, 1974 recorded for Transatlantic & ‘Stand up and Be Counted’, 1975, ‘Houdini’, 1976 and ‘Hearts of Fire’, 1976 all recorded for Pye) complete with demos, singles and b sides. These are the definitive musical collections of Stray, the London based four piece who were so highly regarded, and who worked bloody hard between 1974 and 1976. Like so many of their peers who made a great live impression in that early part of the 1970’s, Stray had already built up a large following. Lead guitarist Del Bromham (a guitarist who is still highly regarded among guitar aficionados today) had already been plying his trade as a teenager in his brother’s band, so had honed his live skills early on.

This meant that when Stray coalesced around Del Bromham, vocalist Steve Gadd, drummer Ritchie Coles and bassist Gary Giles, the band had already had a few years gigging experience, working the clubs in 1967/68 (even though the band were all only around 17.) This hard work ethic, and the fact they had honed their craft on the road meant they had already served their time when they were eventually signed to the Transatlantic label, who were looking to expand their horizons into the burgeoning underground scene. It also meant that, as a band, they were already the finished article, so there’s no first album jitters or false starts on their debut ‘Stray’ (1970).

Instead, you get a highly confident and energetic 8 song debut album. Borrowing the phrase ‘all killer and no filler’ the fantastic opener All in Your Mind (eventually covered by Iron Maiden of all people) acts as a statement of intent,  as (to all intents and purposes) what is their stage act is laid down here for all to enjoy. You wouldn’t know their age based on the song writing on show here.

The soulful vocals of Gadd and the bluesy guitar work of Bromham works in tangent to create a vibrant and energetic debut that is an absolute joy to listen to. It reminds me in part of the debut by Wishbone Ash, not so much musically but, certainly, spiritually in that unique sound both bands have and, in their sheer innate confidence of their own talent, that they can go out there and make any kind of music they like just because they can.

By 1971’s ‘Suicide’, another highly rated album, the boys had none of the sophomore slump that afflicted bands like Yes or Deep Purple instead, they bounced out of the studio with another mighty fine hard rocking set of originals (that’s another one of their strengths, for their first 4 albums they relied entirely on their own song writing), the bands musical sound had expanded, as to be expected, with the introduction of instruments like mellotrons and pianos.

Other than that they were still the hard rocking London quartet that they started out as, building on the success of the debut and, with some fine Bromham cuts like Where Do Our Children Belong and Do You Miss Me, and the Steve Gadd penned Dearest Eloise, the band were expanding their sound whilst remaining true to their roots.

Listening to these albums, you can see that no matter what they did, there was always something innately Stray about them, you could never mistake them for anyone else.

By the time 1971 finished the band had already released their third album, the more expansive ‘Saturday Morning Pictures’ (complete with the obligatory Hipgnosis sleeve), which really opened up the bands sound, due in part to the maturity of their song writing (check out After the Storm or the instrumental passage in Queen of the Sea) but also due to the production by the legendary Martin Birch (who was moving into production after making his mark engineering for bands like Deep Purple).

Birch of course made his mark with Iron Maiden but here, his list of contacts helped widen the bands sound out. With the calibre of guests such as the wonderful PP Arnold, Vicki Brown and Lisa Strike, all of whose sublime voices added so much. This was a step up in sound and quality and was due to the band’s building success.

1973’s ‘Mudanzas’ saw a more widescreen approach in term of production, with orchestra and brass on tracks like the driving Come On Over (a decision which didn’t sit too well with Bromham, who thought they drowned out the band at points), it certainly smacks of ambition and puts a more commercial sheen on the sound and, given a push, could have put them on a sounder and more successful commercial footing, especially with elements of the ELO approach running though this and  Gadd’s vocals just getting better and better. Tracks like the brilliantly bluesy Gambler work well with the brass and the funky bass of Giles, who, along with Coles, is the powerhouse rhythm section that keeps the band motoring along. Bromham’s guitar is fine as ever and the harmony vocals he now also provided, add so much more to the music.

By 1974’s ‘Move It’ the band were on the verge of leaving Transatlantic and, for the first time, not only did they record a cover version but, they also made it the title of their album! Relocated at the managements suggestion to the States, ‘Move It’ was recorded in Connecticut, produced again by Wilf Pine from their management company. As Del Bromham is incredibly honest about in the superb booklet notes by Malcolm Dome, it was a mistake on the band’s part to switch management.

Opening with a drum solo called Tap (after all, this was 1974, and it was illegal for all prog and rock albums to be released without a drum solo) they then launch into Move It, which was completely Strayed up and has plenty of that guitar and power they well were known for. To be honest, it blows Cliff’s version out of the water.

The rest of the album, whilst being classic Stray, has always been regarded by the band as bit of a mish mash where they were trying too many different things. Tracks like Bromham’s rocking Hey Domino,their cover of Jimmie Helm’s Customs Man or Gadd’s Mystic Lady and Our Plea especially, moving the band into slightly softer and more melodic areas. This is the sound of a band searching for a new direction and not quite finding it, not a bad record at all, but certainly one which has plenty of alternative musical avenues to head down.

With the final disc in the Transatlantic Years containing their Pye demos from 1968, which show how fully formed the band already were, to the singles A’s & B’s and a couple of tracks from a Transatlantic compilation in 1975, this is the bands early years complete, and completely marvellous.

This is a fine collection of 5 brilliant albums from a band who are sadly underrated and who could so easily have been one of the biggest bands in the early 1970’s. The second collection, ‘Fire & Glass’, picks up the Stray story in 1975. Upon leaving Transatlantic, looking for a label with more clout in the rock area, Stray found themselves on Pye and, having also lost original member Steve Gadd, who was moving into different musical areas than Stray. Luckily they had already hired a second guitarist, Pete Dyer, to do some of the heavy lifting on stage so Gadd could be the frontman so, when Gadd left, it ended up with Bromham and Dyer singing and playing guitar.

This had an impact on the sound, as Bromham took songs that he was intending to use as a solo album and brought them to Stray, ‘Stand Up And Be Counted’. With a far more cohesive sound than its predecessor, and a different feel, with two guitarists in the band and two vocalists, it has elements of Wishbone Ash to it but, then, that’s more the two guitars than the music.

Musically it shows how Bromham’s song writing had matured and this shows across all three of these Pye albums in fact, tracks like Stand Up and be Counted, with its soulful female vocals, and Waiting for the Big Break (autobiographical perhaps) are a couple of standout songs on a fantastic album.

1976’s ‘Houdini’, released just at the dawn of Punk, is, again, a fantastically coherent set of material, running against the perceived current style. We can ignore the fashion as this year’s fashion is always next years cast offs, true class will always shine through and that is what Stray have by this point in their career. A relaxed muscular swagger on tracks like Give a Little Bit, with some fine guitar work from both Bromham and Dyer, the wonderfully anthemic Everybody’s Song and the brilliant Fire and Glass (which provides this collection with its title) showed a band still in control of their sound and their music with some real funky swagger on Bromham’s Gonna Have a Party.

Their final album before the band split up was 1976’s ‘Hearts of Fire’, released in December in one of the most incongruous sleeves ever, one which Bromham also, in candid honesty, wasn’t too chuffed about. It’s some weird robot which has nothing to do with the content of the music, ah record labels hey?

Tracks like Buying Time brought a funky sound and use of the talk box to add some fine effects to the solos, meanwhile Knocking at Your Door has a far more laid-back West Coast vibe, not dissimilar to where Fleetwood Mac were at the time.

Again, Bromham was the principle songwriter on these album, with only one track (Take a Life) being a co written with the original Stray trio. With Bromham writing the bulk of the album, again it has a musical flow and coherence that some of the earlier albums didn’t have.

The mix of acoustic and electric guitars and subtle keyboard parts give this album a real laid back and chilled out vibe. Don’t get me wrong, there is plenty of that defining guitar sound, but the song writing has matured into a real soulful sound and this is reflected by the arrangements and themes on the album. I Wanna Be having that amazing driving guitar work and powerful bass line, hints of disco bubbling under, and reminiscent of the sound that certain NWOBHM bands would use.

This is a fantastic set of well written and performed rock sounds and, despite Stray being the same age or younger than the Punks who reduced music to a Year Zero approach in 1976, they were being old school, they unfortunately split up, never quite having been as successful as they deserved.

The overriding impression from listening to these albums and reading the history is that Stray were the right band but never quite in the right place, or on the right label, at the right time. Instead, like so many great ‘cult’ bands, they have been discovered by word of mouth and people have liked what they heard.

What has astonished me is that in my 20 odd years rooting round in the obscure corners and lost attics of prog and classic rock music, I have never heard of Stray before, or had them recommended to me. Which just goes to show that you can show an old hack a new trick and that there are still some amazing bands out there to rediscover and rehabilitate.

Stray reformed in the 80’s and carry on working now, however it is these 8 albums that made their reputation and which are an absolute delight to discover. If you’ve never heard them you are in for a treat, if you have heard bits, then you’ll be amazed what you’ll find and if you’re already a fan, then you’ve probably just wasted the last 15 minutes having me tell you something you already know!