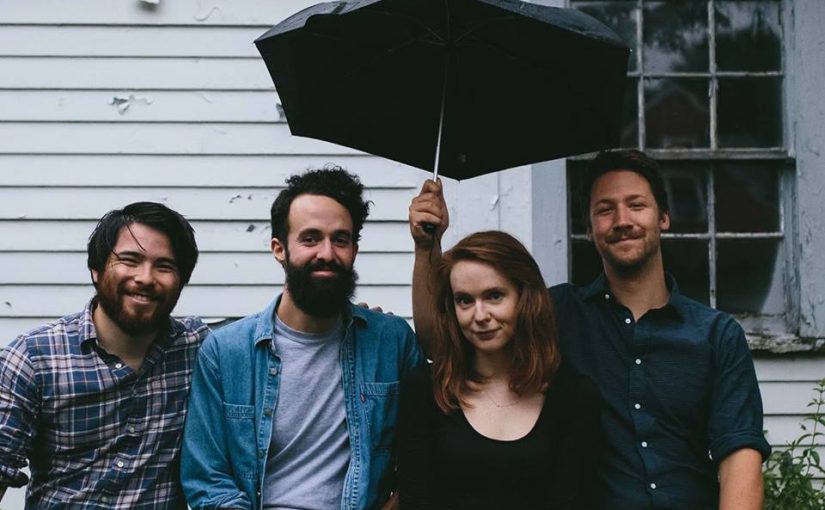 Ever since I met Iain Sloan and was introduced to the Americana of The Wynntown Marshals I have been hooked on that sound and the heartache and melancholia of love-and-loss that is at the heart of country-folk. Music that tugs at your heartstrings, there’s nothing more wonderfully emotive than a well played lap or pedal steel guitar in my opinion!

The next release from Loudon Temple at Bloody Great PR that I’m investigating falls slap bang in the middle of that territory, the self-titled release from Boston, Massachusetts country-folk quartet The Novel Ideas. Incredibly plaintive 4- part vocal harmonies and that blend of pedal steel, guitar, fiddle and organ which produces such a distinctive and American sound.

Four friends – Sarah Grella (vocals), Danny Hoshino (guitar, pedal steel, vocals), James Parkington (bass, vocals) and Daniel Radin (guitar, vocals) – who contrive to convey honesty and intimacy through their music. Capturing the renowned spirit of their live performance in recorded from was a challenge, but the result is a heartfelt representation of who The Novel Ideas are. There’s a real feel of love and longing at the core of The Novel Ideas and it produces a sound that is utterly addictive. The vocal harmonies are at the entre of the band’s unique sound and they imbue everything with a dignified and refined grace. Wistful nostalgia and melancholy are at the heart of songs like opener I’m Not Waiting and the tone of the pedal steel guitar is full of longing and sentiment.

The great fiddle playing of Eva Walsh adds country polish to I’ll Try, a touching song that speaks of regret and loss and the vocal harmonies take centre stage on the pastoral Americana of Old Ways. This record is an immersive musical epxerience and you find yourself becoming more and more involved in the stories of small town America, the beauty and fragility of  Broken Glass is superb, a song that tugs at every single one of your heartstrings and will produce a lump in your throat with its ethereal grace.

Music that speaks of broken hearts and the ending of life’s journeys but that does so with sympathy and compassion, the mournful grace of Sarah Grella’s vocals really stands out on Lost On The Road but it is when the four-part vocal harmonies take centre stage that this refined quartet are at their absolute best. Take the wonderful The Blue Between Us, here the vocals are used as an extra instrument to give one of the best tracks on the album and Danny give sone of his best performances on the pedal steel, there’s something heartwarming about the music that The Novel Ideas create and while its themes might be regret and loss, there is always the hope that love will be our saviour. The warmth and humility of the music shines through on Farm which has a more straightforward country sound to it, although elegantly polished, again Danny’s pedal steel stands out, this time accompanied by the sublime fiddle playing of Eva Walsh. Additional kudos must be given to the fantastic drumming and percussion of  Elena Bonomo and the piano and organ skills of John Waynelovich throughout the album. The calm unflustered grace of Dena is another standout track, the dignified, melancholic vocals accompanied by the captivating music that soars above you, its feels like a sad song but it is sadness tempered by real beauty.

Every song leaves its mark on your heart and your soul, Calling You Out  and Mountain are both incredibly heartfelt pieces of music that hit you on a basic emotional level, grace, beauty and elegance combined in a simple musical package. Incredibly accomplished musicians who can wonderful write songs of love, loss, grief and joy that interact with you and your emotions perfectly, the album closes with the simple brilliance of the spiritual I Was Not Around. It’s a bittersweet poignant song whose fragile grace is tempered by the feeling of loss and sorrow. An emotive track to close out an album of emotional highs and lows.

Such an emotional rollercoaster, The Novel Ideas have created a beautiful collection of songs that hit you hard on a basic emotional level. Incredible musicians as well as highly accomplished musicians, Americana and country-folk has never been more appealing.

Buy The Novel ideas direct from the band here