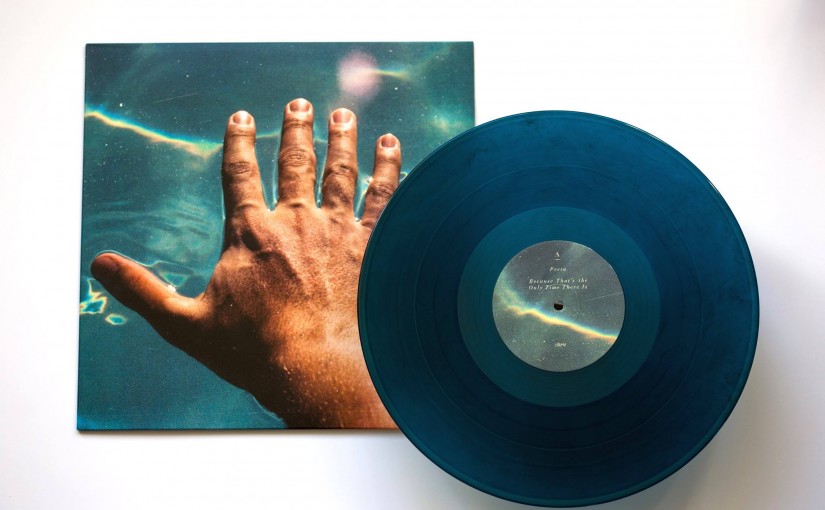 I don’t review an instrumental album for ages and then two arrive at once, it’s like the old London buses analogy!

This time it was a message from fellow Yorkshireman Cai Sumpton,  following on from my review of Flicker Rate,

If you like post-rock then you might like my band People As Places As People. We just released our debut EP ‘For the Time Being’ on 180-gram marbled translucent blue vinyl last month!

Well, you know me, I’m a sucker for instrumental music so I was never going to turn it down. I really like good album art too and I thought the album cover was quite intriguing.

So, who are People As Places As People? To be fair, they are not very forthcoming, about all I could glean was that they are, “an instrumental post-rock band from Halifax, England.” (Yorkshire, that’s a good start).

Looks like it will be a case of the music doing the talking then…. ‘For The Time Being’ is a 3-track EP. It’s quite long for an EP at thirty minutes so, without any further ado, let’s dive in and see what we’ve got…

Opening track Preta begins with delicate strummed guitars giving a low key vibe. The drums join in and it is a rather pleasant place to be, evoking hazy and carefree summer days. The music seems to make its own course, like a gently bubbling little stream, across your sensory synapses. The rhythm section of drums and bass act like a guiding hand, keeping everything on course. A nicely judged and uncomplicated journey through a musical world of wonder that takes a turn into a darker arena, a powerful riff and thunderous drumming adding an insistent urgency, as if the peaceful world of before is suddenly threatened by the sinister unknown. The furrowed brow is replaced, once more, by calm serenity yet an intricate guitar line never lets you settle before the huge soundscape returns, this time with a harsh, coruscating edge. This is clever musical storytelling.

Because That’s The Only Time There Is begins with another huge and monstrous riff before settling down into something much more poised and tranquil. To me, it has a nostalgic, sepia tinged feel, evoking thoughts of times gone by with its languid and unhurried pace, more emotive than the fierce aura of the first track before. All of a sudden, it changes tack into a staccato and edgy tone, the guitars chopping at each other and the drums intricate and solid, this assault carries on for a while before it seamlessly moves back into that original peaceful and easy tempo, all sweetness and light. Both the songs seem to have had a bit of a Jekyll and Hyde character to them, making them unpredictable and interesting and this track transforms once more with a veritable mountain of a riff that knocks you clean off your feet, leaving you breathless and dazed, really powerful stuff yet never being anything less than melodious.

The final track of this instrumental trilogy is Dutch Boats and it opens with a slightly plaintive note, high pitched, short sharp picks of the guitar metronomically resounding in your mind. It builds momentum slowly, a wistful and contemplative tune that has a strong yearning ambience to it. It leaves a sentimental footprint on your soul, leaving you longing for something you just can’t put you mind to, perhaps golden days of long ago. It has a beautiful, if melancholic air, like a fragility that is only one step from breaking. Ethereal and almost insubstantial, it wisps across you mind, transfixing and hypnotising you. What happens next makes your hair stand on end, the dominant and compelling rise of the music hits you right in your solar plexus as this track leaves a forceful and lasting statement of intent and, as the last notes fade away, I can’t help but to feel a little sad and overwhelmed, that’s the power of great music.

It is not easy to make instrumental music that can touch the listener and resonate at their very core but these Yorkshire lads can do it with aplomb. You immerse yourself in every note and become intricately involved and, if that’s not what music is all about then, why do we bother?

Buy ‘For The Time Being’ from bandcamp