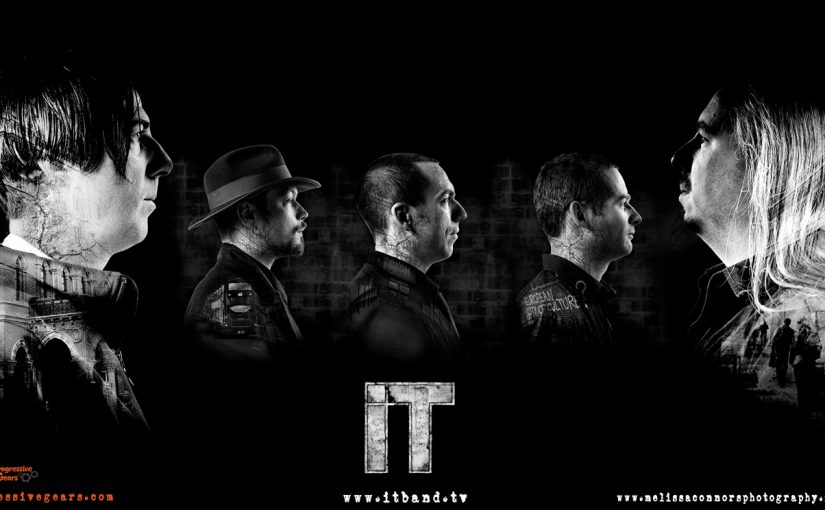 You know when you listen to an album and then look the band up and realise you have missed out a fair few albums and some cracking music?  Well that’s how I feel about IT and the album ‘W.A.I.T.T.’ (We’re All In This Together) after just a couple of plays. It is definitely an album of, and for, its time. 2017 is a time of flux politically with some scary things happening to everyday people everyday right now. This album is one that reflects that narrative very well.

Nick Jackson (mastermind No 1), Andy Rowberry (mastermind No 2), James Hawkins (Bass), Will Chism (Drums), and Ryan McCaffrey (keyboards/saxophone) form the band, each seem to have their hands in many pies but they still feel like a unit on this album. Check the website out for whom and what they are, it’s fascinating to see the influences they cite, no spoilers from me I promise.

Thematically the album is roughly the equivalent of “I am Daniel Blake”, the narrative of an austerity ridden country on the wrong end of one too many cuts and the impact these make on the key characters. In 10 songs we are taken on a journey cutting from the political voice to the personal voices of the characters. Opening with Power, a menacing bass line drags in a driving guitar riff with an urgent riff building tension relieved only briefly by spoken voiceovers, talking of the selfish power mad political masters. Now, before I go any further I want to stop and reflect that the subject matter is dark and filled with insurrection and revolution. Although political in context this in no way makes this preaching or ranting in the way it delivers. Think of Pink Floyd’s ‘Animals’ or Steven Wilson with ‘Hand Cannot Erase’ as topical and full of insight but still damned fine albums rather than the protest songs that will be filling your minds from my first few paragraphs. Much has been said by Prog Fans about politics and music and how they should never mix. Although I fundamentally disagree with that, I accept that some think this and I do not want to prevent anyone from even trying to hear what I see as an excellent album.

Moving swiftly on, the music flows from one song to another and has been considered and crafted to have the feel of a single suite rather than 10 songs glued together in the name of a “concept”. The Working Man is catchy and has a rather gloomy, if eminently ‘singalong’, chorus line. “Living on a landfill of plastic and bone” is an ear worm if ever there was one, if a tad strange to anyone not tuned into to your headphones. This is melancholy in the mould of Porcupine Tree or Steve Thorne, at its best poppy & accessible but also with hidden depths.

Gamble The Dream is a real rock out with a  hard guitar riff driving the song, reflecting the pressure on the economy and the drive to achieve. In the gloomy Voices we find ourselves in the head of the protagonist of the album. A George Galloway speech slots in here assaulting Blair and Bush directly on the impact of the Iraq War and the aftermath. The most challenging song on the album but it is anthemic in its delivery.

The epic in length and content The Path Of Least Resistance, at just under 12 minutes, showcases the song writing and musicianship. The key and time signature changes with a wailing guitar solo are wholly worthy of a Guthrie or a Gilmour.

The album ends with Revolution, a thundering bass line with a malevolent tone and a Theremin (?) wailing in the background. The ultimate end to all corrupt systems or a desire change things in extreme circumstances? Again another riff and hook line here that you may well find yourself singing along to on the commute home.

This album has something for everyone – strong riffology, melody, song writing at its core and a tongue in it’s cheek throughout. If art is a reflection of society then this album is art. Fans of Pink Floyd, Dream Theater, Porcupine Tree or Steven Wilson will find something in this to delight in. This is the face of modern Prog shown in a bright light. It blows the cobwebs away stimulates the brain and challenges us to think.

As ever this is not a song by song review nor is it highlights but a whistle stop tease and my opinion of the Album.