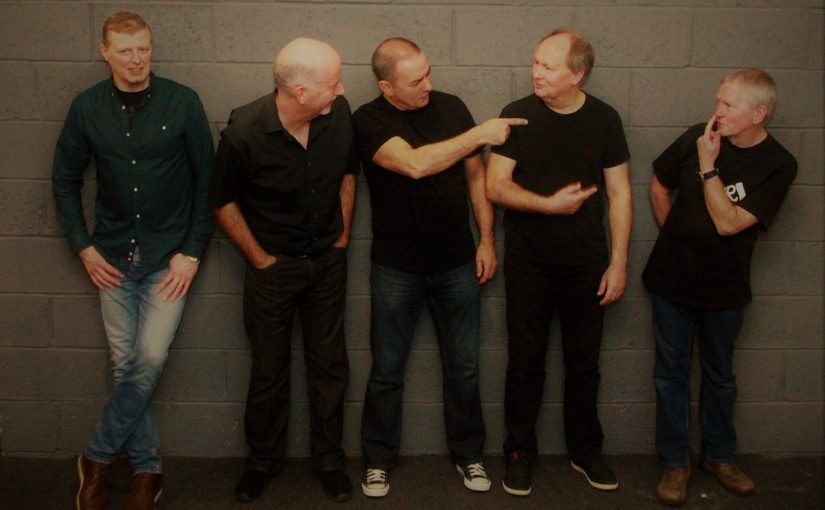 “Long Earth is a prog rock band from Scotland.

We came together by a series of fortunate but unexpected coincidences. A bunch of musicians, some of whom had played together decades earlier, who just wanted to create new music and have fun. By strange coincidence, Mike, Ken, Gordon, Renaldo and Hew all played at the same Glasgow Festival in the 80s…but in 3 different bands!“

So says the PR info accompanying the second album from Scottish proggers Long Earth. I am a fan of their debut release as evinced by these words from my review of The Source,

“Taking what was great about classic 80’s Neo-Prog and adding some modern drama and pathos, Long Earth have given us a debut album that has been years in the making and all the better for it. Yes, it is not without some minor flaws but it certainly is an album that you will return to many a time and will be even more gratifying every time you do, bring on the next one guys!!”

And ‘bring it on’ they have indeed…

Where The Source was a great debut and a quality example of Neo-prog, ‘Once Around The Sun’ takes all that was good about that album and raises it not just one notch but a whole plethora of the bloody things!

The arrival of new vocalist Martin Haggarty in 2018 has added that extra level of je ne sais quoi, you know what I mean, something that you can’t quite put your finger on. Martin joins bassist Gordon Mackie, drummer Ken Weir (both of whom have a connection with Martin through legendary Scottish band Abel Ganz), guitarist Renaldo Kim and keyboardist Mike Baxter to give Long Earth the kind of stature already enjoyed by Scottish progressive’s royalty, Comedy of Errors, Grand Tour and the aforementioned Abel Ganz.

The final cog in the wheel is Hew Montgomery (who has history with all of the above luminaries) who has been a motivating factor in Long Earth, and co-producer of both ‘The Source’ and new album ‘Once Around the Sun‘.

‘Once Around the Sun’ comprises nine tracks of lushly composed and executed progressive rock where every note has a place. The whole album is joyously created and contains a part of every member. It speaks of the wonder of fresh spring days, a hazy and never ending summer, the first leaves that fall on a beautiful autumn day and the joy and warmth to be had sat in front of a log fire with those you love.

The songwriting is exemplary, take neo-prog classic opener We Own Tomorrow, a pin sharp example of the genre with Mike’s keys taking us right back to the 80’s with their wonderfully nostalgic sound. The balladesque wonder of My Suit Of Armour will bring a lump to your throat and a tear to your eye, wistful and melancholy in equal parts. Both tracks bring Martin’s superb voice front and centre, he has emotion and passion deep in his core and it shows with every word he sings and the guitar solo on the second track is just exquiste.

The urgently driven A Guy From Down The Road is suitably mysterious and enigmatic and lengthy, coming it at exactly twelve minutes. There’s a definite jazz-funk feel to the bassline and the whole song just grooves along nonchalantly, you may have guessed that I like this track! The band obviously hit it off and just seem to play off each other, there is a feeling of bonhomie that runs throughout the album and its a joy to feel and hear it in every note.

What About Love seems a little out of context with the rest of the album with its more mainstream feel, like a cross between early Wet Wet Wet and Fish era Marillion. It is, however, full of childlike charm and a simplicity that is difficult to ignore and eventually you begin to appreciate its appeal. Mystery and conundrum surround The Man In The Mirror with its 1950’s film noir feel and gallic undertones. A modern day soundtrack to films like The Maltese Falcon, you can’t help but love its enigmatic aura.

The album closes with four tracks named after the four seasons and every song fits each one perfectly. Spring has that feel of rebirth after a long winter, full of joie de vivre and a hope for the future. You’ve got to check out the guitar note on Summer, fans of early 80’s Simple Minds will definitely hear touches of The Big Sleep in there and it gives the song a feel of those long, lazy, hazy days of summer. You know what I mean, the ones when you were a child and had no cares in the world, this track definitely echoes those times and its sepia tinged invocation of memories is perfectly judged. The solemn, serious introduction to Autumn fits that time of the year perfectly as the long golden days of summer become just a memory yet those memories are full of love and you know we are going into a period of change which can be exciting. Kids love winter, they love the snow, the frosty mornings and the run up to Christmas and Winter is a perfectly written feel-good nod to the memories of the last twelve months. Good or bad, they make us what we are, let’s get together with those we love and salute what has passed and what we have to come.

With the provenance flowing through the band, Long Earth were never going to produce anything but a great follow up to ‘The Source’ but in ‘Once Around The Sun everything seems to have clicked and we see a band nearing their creative zenith. Take my advice, go and listen to what may well be one of 2020’s subliminal releases.

Order the album direct from the band here: