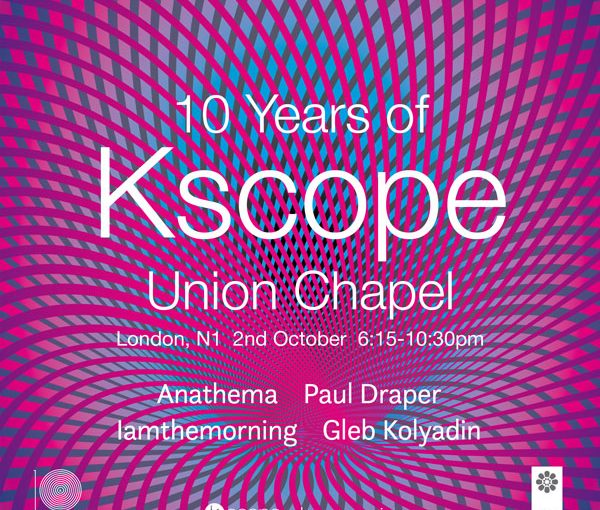 We are incredibly excited and proud to be celebrating our first decade as a record label. These past 10 years have allowed us to share and promote our favourite music, which has evolved over multiple genres whilst remaining fiercely adventurous. We kick-off the year’s revelries with an intimate acoustic show in our hometown, London, at the unique and iconic Union Chapel.

Our story began in May 2008 with the partnership between Steven Wilson and Tim Bowness as No-Man and their beautiful, haunting and cinematic album Schoolyard Ghosts. The label’s sound has since been constantly evolving through some truly brilliant and emotively powerful early projects from the likes of Anathema, Porcupine Tree, Engineers, Richard Barbieri, Gazpacho, Nordic Giants, Nosound and The Pineapple Thief, as well as Steven Wilson’s solo material and collaboration with Aviv Geffen as Blackfield.

In recent years the roster has grown to include a broader selection of talent, from the soaring dynamics of TesseracT, to the revenge-pop from The Anchoress, from the heart-breaking catharsis from Lunatic Soul to the electronica legacy of the great Tangerine Dream.

Shaping up to be a year full of celebrations, our first offering is the 10 Years of Kscope event, for which we’ve lined up a treat for guests with special acoustic performances from Anathema, Paul Draper, Iamthemorning and Gleb Kolyadin. This will undoubtedly be a night to remember for music lovers, and may even feature a few surprises… Anathema, following the release of 2017’s The Optimist, continually evolved by placing hope in the future – from leaving the underground scene they were fundamental in establishing to continually mesmerising the world with stargazing post-progressive alternative rock that knows no borders.

In exploring what we might do to expand the music still further, out of thin air came the idea to arrange music in a ‘third way’, in the space between the acoustic band and the live rock band..

With ‘ambient acoustic’ we feel more free to explore many textures, mixing live loops, piano, strings, percussion, electronics, guitars and voices, all within the essence of the songs and the emotions they carry.

We hope you enjoy this next chapter of the story, the journey of discovery, of searching for something that can never really be found.

Anathema will be performing additional dates as part of their Ambient Acoustic tour in France, the Netherlands and the UK. For full details, see their website.

Learn more about Anathema via their artist page.

Paul Draper, one of British rock’s most singular and distinctive voices of the iconic 90s band Mansun, has returned with a top-20 debut solo album Spooky Action (“A properly fantastic album, ★★★★★” Record Collector).

Talking about the show, Paul told us he is “delighted and proud to be playing for my label Kscope at their upcoming 10th Anniversary show. It’s been such an exciting and productive time working with the Kscope team since I signed with them, so genuinely looking forward to playing a few tunes and celebrate with the Kscope family at the Union Chapel”

Iamthemorning, the progressive chamber duo, Gleb Kolyadin and Marjana Semkina, formed in St. Petersburg and have released two albums of rich and eclectic music on Kscope, Belighted and Lighthouse, that showcase their brilliance as pianist and vocalist. Their latest studio film and soundtrack, Ocean Sounds, is due for release mid-October.

Gleb recently released his self-titled debut solo album, featuring an array of impressive guest performers, to high praise including a 4 ½ star review from All About Jazz, who said it “finds the magical chemistry to weave everything into a dazzling ride with the smarts of Robert Fripp and the badassery of Beethoven. The spirit of Keith Emerson is probably pumping his fist in delight at seeing such inspired wizardry to carry on the tradition, and who knows, Franz Lizst may be cheering just as loud.”

Gleb: “For me, London was always a place where all important things happen. And this fall I will be very happy to be on this very special event in a wonderful place with great people and present a few piano passages from my solo album. Very exciting and looking forward to October.”

Marjana: “The first time we met Kscope team was on “5 years of Kscope” festival. It was our first time in London and back then no one knew who we were. It’s amazing how things can change if you work hard enough, and it’s our greatest pleasure to be performing an exclusive chamber set in a wonderful Union Chapel (which was always my dream venue) as a part of the label. We both are very pleased to be invited and are very much looking forward to this wonderful evening.”