I think most people will concede that 2020 has been a somewhat challenging year, especially with the world wide impact and devastation that Covid 19 has bought, along with the subsequent lockdowns that have been enforced on different countries, affecting both world trade and travelling in particular.

Musically, tours and shows have been cancelled or postponed; often indefinitely. However, this has allowed artists time to record new music, albeit socially distanced or even remotely.

Yes were to have been performing their latest run of complete albums featuring ‘Relayer’ but that has inevitably fallen by the wayside and been postponed till 2021. To whet the appetite, they have elected to release a new live album recorded at the Hard Rock Hotel in Las Vegas, documenting last year’s Royal Affair Tour .

This is a single disc affair but with a new Roger Dean cover and an interesting set list including Yes’ own version of John Lennon’s Imagine (a song Alan White actually performed on prior to joining Yes), the track also includes John Lodge of The Moody Blues on guest vocals. The balance of the tracks are staples of the Yes canon, mainly focused on their prime years i.e. pre 1980’s, although time is made for a rare version of the Simon and Garfunkel classic America, which gets a decent dusting down here.

The album opens with No Opportunity Necessary, No Experience Needed, which also includes the main theme from The Big Country (which is an interesting twist). It sounds very impressive and allows Steve Howe to vamp things up a little. The band sound on good form, relishing the experience and playing very competently indeed, in fact seldom have Yes sounded as on form as they do on this recording.

Geoff Downes’ keyboards continue the theme with lots of orchestrated sounds filling the sound scape out before Steve Howe delivers a fiery solo. But this album is more about ensemble playing than solo flights and those excesses are tightly reined in, this album is about Yes as a band it and plays to that strength very well.

Next track is the powerful Tempus Fugit from the ‘Drama’ album. Again, it is delivered with much bite and flair, Billy Sherwood’s bassline sounding especially muscular and fluid throughout, Steve is on on rampaging form too with strong drum support. This performance reveals just what a monstrous track Tempus Fugit really is and how its status has grown as the years have gone by, so much so that now it is an integral part of any Yes show and rightly so too. Next comes a familiar pedal steel lick that heralds Going For The One with Steve’s interjections taking this song soaring to the heights as it plays as another fabulous performance. Strangely the audience do seem a bit restrained here and they do not really roar like a great Yes crowd can, thank goodness that this performance was captured on tape and is now available for us non-Americans to enjoy at our leisure.

All Good People follows in this fine set of crowd pleasers and, again, Yes deliver an excellent version of this great tune. I know the band have become a bit polarising these days, with lots of detractors but, let’s be honest, this version carries the flame just as well as any others do and they seem to still be enjoying performing these pieces, so, on that basis, long may it continue! Any Yes is better than none at all in my view. Back to the track, which is a genuinely great performance and one that allows some delicate guitar lines from Steve to work in concert with some thunderous bass and powerful drums.

Siberian Khatru follows and represents another classy example of the current line up, still having the classic Yes sound The band give an excellent reading of it, with all its excellent parts sounding as strong and good as they ever were. We are then treated to a short version of Onward from ‘Tormato’, an album where Yes faltered and fell apart, however, this was one of its better songs.

The audience are then treated to the first real epic in the form of the rarely performed (these day at least) America, made famous by Simon and Garfunkel. I first heard this song on an Atlantic sampler LP, ‘The New Age Of Atlantic’, where it shone out as a remarkable reworking of a great tune and it still has the power to impact some 48 years after first being released. I have always liked this song and here Jon Davison brings this song to life wonderfully. It is a fabulous retelling of a great song, Jon’s voice is strong and warm and he brings new life to this version. Some great guitar work from Steve and fine contributions from all quarters make this a superior version of a great song.

Imagine is a new version of the Lennon track performed by Yes with John Lodge on guest vocals. It is a more than adequate version but, really, adds nothing new to a well known and loved song. Then it is into the home stretch with Roundabout and Starship Trooper, both of which are well received. They are excellent versions, despite the fact that they had been covered many many times now. Then again, these are classic songs that everyone know and love and always want to hear played. It’s an excellent way to bring the show to a finish, everyone going home happy and the legend is preserved, credibility is maintained and Yes live to tour another day.

This album is a fine collection, nothing new or essential but certainly a fine and worthy memento of an interesting tour, all for less than the price of a T shirt! Highly recommended and certainly worth a listen in my view. 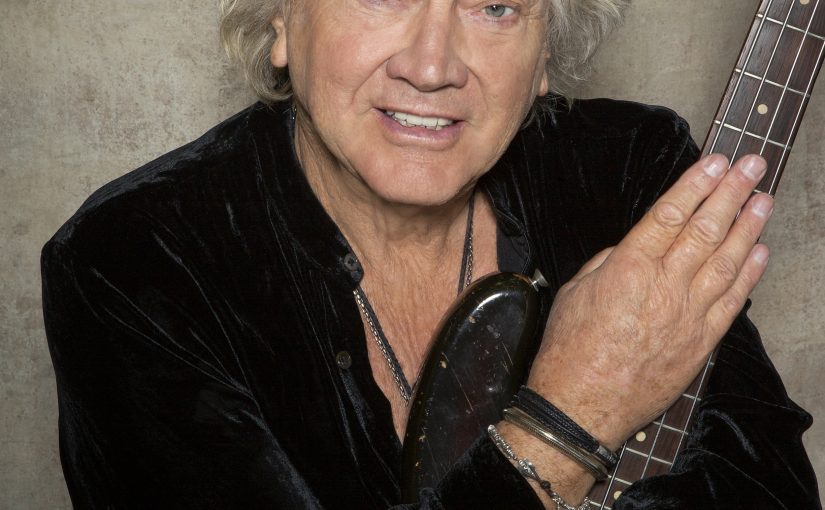 John Lodge, bass guitarist, vocalist, and songwriter for the iconic Rock & Roll Hall Of Fame 2018 inductees, The Moody Blues releases B Yond – The Very Best Of on 27th September through BMG Records.  The album will be available initially as a CD or Digital Audio. A double vinyl gatefold (180g) will be released in November.

You can pre-order the album here:  https://johnlodge.tmstor.es/

B Yond features 3 new recordings, 2 new remixes, and other tracks chosen by John as he revisits the very best of his career with the Moody Blues together with his solo work.
For this album Lodge went back into the studio to totally recreate Street Café, (Evening) Time to Get Away and Legend of a Mind, with the wonderful musicians of the 10,000 Light Years Band.  The tracks were co-produced by John and Alan Hewitt, and features John on his original Fender Precision Bass which he recorded all of the classic Moody Blues songs on.  He is joined by Hewitt on keyboards, Duffy King on guitars, Billy Ashbaugh on drums and Jason Charboneau on Cello.

The result is a fresh modern feel whilst still retaining the original magic of these songs. Legend of a Mind was particularly important for John to include on this album as it is his tribute to his friend Ray Thomas. The original 24 track recordings of ‘Say You Love Me’ and ‘Summer Breeze, Summer Song’, were also remixed and remastered to create a 2019 feel to these songs that were so much part of John’s first solo ventures.

Lodge states: “With this album I want to share with you my ‘deep cuts’ – songs that I’ve wanted to revisit, and songs which have become an important part of my life. It is this which has taken meback into the studio, to share with you my music and record again with my Fender Precision Bass.I hope you too can join me on this journey… B Yond”