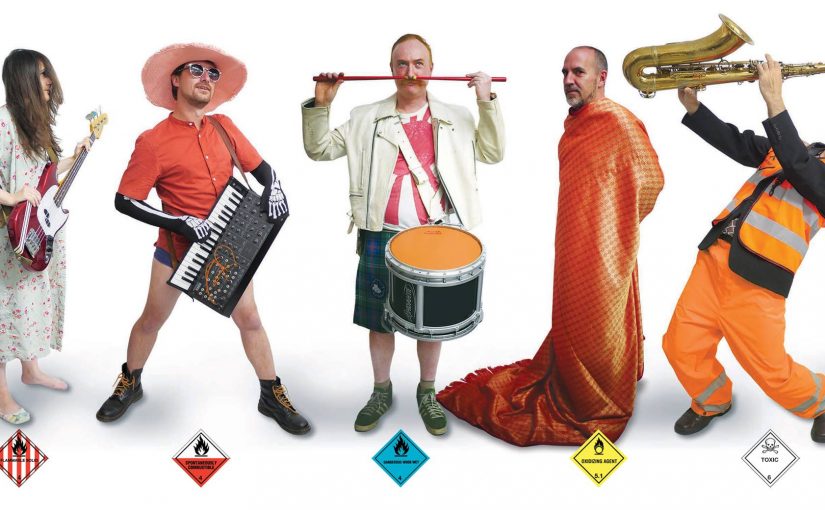 I decided to take a break from reviewing after a bit of a rough time life wise. I needed the break and wanted to just visit albums for the sheer joy of listening rather than through the critical ear of a reviewer. This meant that I approached this album with a tinge of trepidation. This trepidation was washed away by the end of the first track because it was obvious that the band have passion and a great joyous approach to making music.

I have only been aware of the band since listening to “Protein for Everyone” on the recommendation of a fellow DJ and I admit I was impressed by the feel of the band and their unique take on making music. It has taken them three years to bring out this new album but it has very much been worth the wait. They describe themselves as “a place where Canterbury prog, 60s psych and melodic pop gently collide.” I can understand and hear that as an influence in their writing but I hear Krautrock  Grobschnitt, Amon Duul and The Bonzo Dog Do Dah Band (especially Viv  Stanshall and Neil Innes  solo stuff too) colliding with Knifeworld and Cardiacs. This is all bundled into some very sophisticated writing and recording and yet they are still incredibly accessible.

There are 11 tracks on this album with some seriously insanely eccentric off the wall songs but everything is filled with the common theme of things in the modern world that well and truly annoyed the faecal matter out of most of us. Call it a concept album if you must but it is more of a thematic exercise in reflecting the antithesis of Ian Dury’s “Reasons to be cheerful pt 1”. Spielen mit Katzen, which opens the album, begins with a very Van Der Graaf Generator sax vs percussion race running all the way to the end of the stave. It even has a funk bass line drawn directly from 70s disco dropped in at an unexpected point. I can only assume that cat videos on social media annoy them as much as they do me. It immediately brightens the moment to this listener.

The album flows directly into Chinese Brainworm (Taeria Solium), it’s not every day you get a song about a parasitic worm that infest pigs but apparently this is the day we do. The use of brass is excellent, it counterpoints the vocals beautifully and adds a unique quality to the sound with a very soft tone and it’s not even vaguely harsh, as the use of sax can often be when ill used.

Rattle on through the album with songs that reflect on cold calling, PPI pests and scamming and you may find yourself singing “We’ve got PPI” as an ear worm randomly as you wander around the house listening to this album.

A real stand out track among an album of great observational songs is A New Atmosphere, by far and away the longest track and musically superior because the themes get better exploration and use. Their Bristol roots show here and it’s obviously a place they feel close to as they wander round the city and give a running commentary of what a bus trip around the city must feel like. The keyboards play a huge part and the vintage sounds that are used bring out the band’s obvious love of the psychedelic music of the 60s. It is a lament to the lost of the city and the pain they feel for the urban decay with large references to world war one.

On the whole this album has something for any lover of music that coaches you out of your comfort zone. It has a wry sense of humour running through it with a cynical view of the world we live in today. It is a bonkers album at times and deadly serious at other times with genuinely intelligent music that never becomes pretentious. Like Birdeatsbaby and other bands of a similar vintage, they represent some new music coming out right now that is breaking traditional definitions of genre and styles and all the more to them I say.