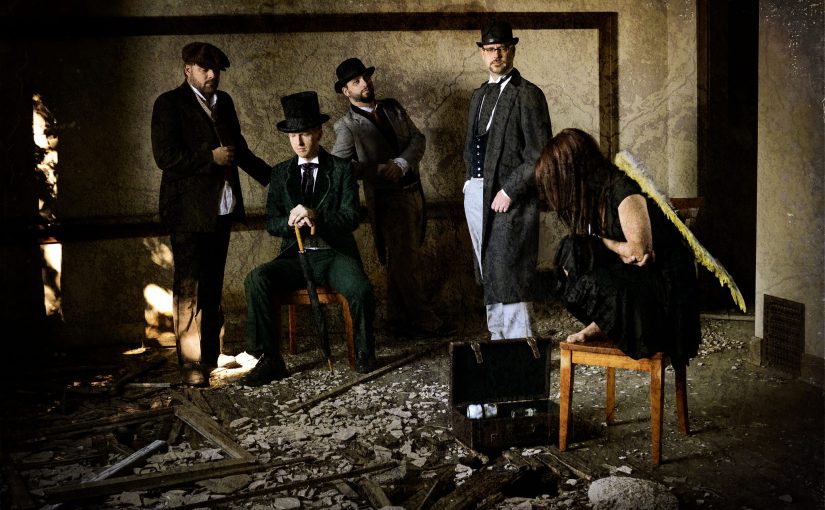 Formed in 2010 by former members of Drift Effect and Morning Society, Meridian Incident (comprised of Ray Smart, Marc Hedman-Dennis, Adam Schmid and Tom Trenka) is a progressive rock group with a longstanding history of playing together on some of the Twin Cities’ most prominent stages. With a sound reminicent of A Perfect Circle, Tool, Porcupine Tree and a touch of Pink Floyd, MI is a tour-de-force of compositional and technical artistry.

I first connected with Meridian Incident through the positive power of social media. The band had shared a sponsored video for the track Yellow Wings on Facebook and I had a listen and thought to myself that I’d heard something just a bit special. I contacted the band and then things went on from there with me receiving their new album ‘Istology’ for review.

A concept album about an intriguing hero or heroine that lives in all of us, the forthcoming ‘Istology’ is based on a screen play (written by Ray Smart) that tells the story of Janey, a girl tormented by abuse as a child who embarks on an unbeaten path of self-discovery.  Subtly including iconic worldwide spiritual imagery, ‘Istology’ follows Janey through a journey plagued by shadows of self-destruction and loathing, to a place of understanding and acceptance of self.  The album tells Janey’s story as she evolves through a remarkable transformation: learning to overcome, learning to love, and finally learning to trust.

So, a complex story then but would the music actually be any good? Read on and find out… Opening track Scene 13 is very much a scene setter with its laid back and measured introduction that you feel is just building up to something much more imposing. Layers get added to increase the complexity and the vocals begin, weaving their story into your psyche. Ray has a really good voice, complex and full of meaning and uses it to great effect throughout the album. The tension builds more and more as the tempo increases slightly and Ray gets more passion and even a hint of menace in his voice. The song begins to open up with Adam’s powerful drums and Marc hits us with some intense guitar work, Tom’s bass driving the whole thing. A really intense musical workout to get your synapses sparking.

Title track Istology opens with 90’s grunge inspired riffing and drums before Ray channels his inner Eddie Vedder and we are treated to a really classy track with an abundance of energy and dynamism. I was a huge Pearl Jam fan back in the day and this song reminds me a lot of those times with the lighter calmer verses being accompanied by the heavier chorus and that really addictive riffing. There’s a nice break in the middle where Marc gets to show off his technique to the full before some punchy riffage gets us back on course. It’s like 90’s grunge brought bang up to date and, to my ears anyway, works extremely well.

Yellow Wings is the song that got me interested in this band in the first place, I love its heartfelt lyrics and Ray’s voice delivers perfectly. An ardent track that bleeds sincerity, especially on the fervent and moving chorus. There’s a staccato backbeat running throughout, delivered by guitar and drums to give the song and edgy feel at times before the emotionally poignant chorus delivers its knockout blow and Marc hits us with a solo utterly infused with pathos and sentiment. Listening to the track while I’m writing this review just brings back the goosebumps I felt on first listen, a truly powerful and emotive song typified by the expressive guitar and vocals.

Let’s take a more mellow and benign route with In The Wake Of My Own, a laid back and chilled song that still has a lot of meaning and poignance underneath the surface. There is wistful feel to the music and Ray’s vocal has sentimentality at the core. Think of hazy summer days and sepia tinged nostalgia, a superbly calming influence runs throughout this amiable track and as it comes to a close you feel like a weight has been lifted from your whole being.

The album segues straight into Along The Shore, an intricate drum-led introduction leaves a haunting impression on my mind, the distant voices and vibrating guitars give a persistant edginess and disturbed aura to everything. It’s a restless and uneasy instrumental that leaves questions in your mind. Where the previous track left an uneasy feeling, When The Tide Carries The Lotus is an utterly relaxing three minutes of instrumental bliss. Piano led, it is like a gently flowing stream finding its own course through your mind. I felt a feeling of beatific serenity fall over me as each note played out and, as it faded out, I was left with a smile on my face and peace in my heart.

Hallowed opens with a subtle guitar tone and the continuously impressive drums leading the way. Ray’s earnest vocals have something of a hazy feel to them. The track continues to meander gently along, tranquil and somewhat bucolic, an elegant piece of music with lasting emotion at its centre. A more serious tone seeps in as the guitar is unleashed with more ferocity and Ray’s vocal soars to join it before Marc let’s loose a powerful, stirring solo that leads to an impassioned close.

Yellow Wings (Reprise) is a more circumspect version of the track, opening in a judicious manner with a staccato riff and Ray’s almost indistinct vocals. The pace is turned down a notch and the sentiment increased to give it a pared back yet stylish feel. The powerful emotion of the original is replaced with something more subtle and considerate without losing any of the intent. There’s a dynamic instrumental section which, though short, injects some authority into proceedings and Ray’s excellent vocal is present and correct as ever. A refined and suggestive version that stands comparison in its own right and I love the way it closes out.

A pensive and somber guitar opens The Mirror Stares Back and Ray’s ominous vocal joins in to give a quite oppressive solemness to the track. It creeps along in a reflective and preoccupied manner leaving you almost mesmerised with the suspense. A clever use of music to affect your mood and immerse you in the storyline. As the volume increases so does the apprehension and tension, almost becoming unbearable before the song comes to a close and the shackles are unlocked.

And we segue straight into the heavy riffing opening to Shadows, the Soothsayer. A quite hypnotic guitar and drums leave you in a trance like state as the short instrumental gets under your skin, insinuating itself into your very being. A high energy, almost manic close-out leaves you breathless.

Alternative and grunge combine to good effect on Echo In The Water. A low key opening very reminiscent of Porcupine Tree in the early days catches your attention with its subtle complexities. There is some great bass playing and the guitar and drums combine to lead the story on as Ray adds nuances to his vocal delivery. A perceptive and probing track that scores on many levels. There’s a great guitar solo full of meaning and significance and the song breaks out into a hard rocking finish that leaves you properly sated.

There’s no break before we rush headlong into Wind Through The Bodhi Leaves, a potently compelling two minutes that just blows you away as it increases in force and demeanour before blowing out like an almighty backdraft and leading in the composed and sedate Mer De Lumieres, the antithesis of the chaos that came before. It calms your fevered brow and lowers your heart rate before we come to the last track on the album.

Wistful and winsome, Diaspora, Under A Red Sky is a sea of calm serenity that just washes over your tortured soul. From the sublime guitars and gentle drums to Ray’s ethereal like vocals, it has an almost ghost-like and intangible feel, like something just out of reach, a musical mirage that teases you with its benign and soothing tranquility. Graceful music and vocals combine to deliver just under five minutes of music that restores and invigorates your very being.

‘Istology’ is a musical drama and journey that ebbs and flows over it’s sixty minutes to leave the listener completely sated. There’s a subtle intelligence at the core of this release and it is delivered by four musicians at the height of their powers. It should be taken in one complete listen to get the full experience and you will come out of the other end an altogether better and happier person for it.