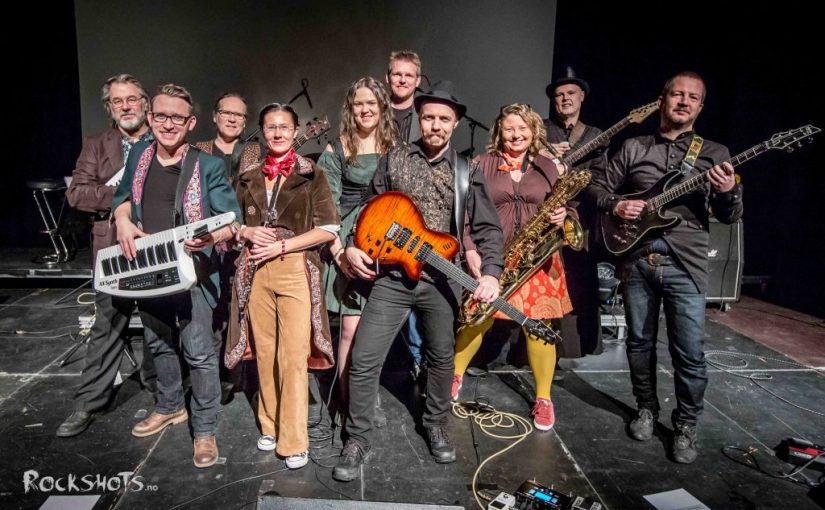 Gentle Knife is a Norwegian Ensemble of 11 members:

There is a saying that too many cooks spoil the broth and you would think that 11 chefs would create a truly chaotic spoiled broth. I am glad to say that this, the follow up to Gentle Knife’s eponymous debut in 2015, is one where the chaos is always under control and adds to the sum of the 11 parts and the very disciplined approach to the music that they make.

“The relentless passage of time is the main theme of our 2nd album, Clock Unwound, which delves into lives overshadowed by longing and disappointment. Plans go askew, lovers betray and dreams fade. Yet, as a sense of resignation descends upon a dystopic inner landscape, moments of beauty remain. Songs are epic in format, and play across a broad spectrum of emotions.”

The promotional material tells us, and it is true to a point, but I hear more.  I have lived with this as an album for a few weeks and see many metaphors for the modern world here beyond the main theme of the album. It dances with a classic Progressive Rock feel with an end to end flow that, for this listener, is important for anyone planning on buying it does just that, listen to the completed album rather than piece meal track by track. The whole is far greater than the parts with themes carried over from track to track reflected and distorted by the huge range of instruments they have on call. Opening with Prelude Incipit, an overture to ease us into the album. A grand piano with ominous chords and a doom laden solitary Trumpet over the top hails the tragic end of times, plaintive and hollow. Dropping straight in to the title track via a lovely guitar life, Clock Unwound is straight from the Steven Wilson play book. Keyboards, guitars down-beat and a distorted vocal giving it a slightly steam punk feels then it veers off onto a remarkable musical journey swapping guitar and keyboard as they battle for supremacy. Veronika has a dissonant vocal line which then harmonises beautifully with the tale of regret and lost hope.  Failed love and life are thematically reflected both in the lyrics and musically. Fans of VDGG will find something here with the way the brass adds to the chaos of destruction and entropy. It is a 15 minute epic but your attention does not waiver and it passes by all too soon.

Fade Away will draw in the fans of Big Big Train, Moody Blues and BJH with its brass and Mellotron opening and is completely unhurried until a middle section of big Sax and Moogs show how carefully balanced the band is in the studio with an orchestral feel to the arrangements. Rapid and mixed time and key changes drop into 2 or three different styles in a 3 or four minute instrumental section. The poignant use of flute highlights the deep sense of looking for what is lost and will never  return. The way Veronika and Brian share and harmonise the lyrical conversation works very well to define the song.

This is a quick jump to Smother, a manic track that always feels close to chaos and a musical riot but then comes back from the edge, again it’s a perfect match for the lyrics, the idea of defeat and loss of all, close to achievement but missed despite all. The dream, highlighted by a jazz section of halcyon days, is all the more painful for the memory of its loss. The brass in this never intrudes but is always here in the right measure.

Plans Askew is the simplest track on the album by far and is almost a straight rock power ballad in form. The Acoustic guitar introduction in this is building on the continuing theme of chaotic loss but critiqued externally as a narrative rather than a first person perspective, it then becomes something else entirely.

Resignation, the joker in the pack and final track on the album, returns us to the primary theme of despair. We have a deceptively sparse track of the end of time for the person and the world as we know it. The song is narrated rather than sung and a weary soul speaks of giving up on all things in a universal expression of depression and loss. This track really picks out the way Ole Martin Svendsen (on drums) and Odd Grønvold (on bass) work to be the foundation that supports the every present mix of music so despite the potential chance of chaos, it never actually happens because they are solid as a rock throughout.

Overall the way this album works deserves praise for its maturity and skill in song writing but also the disciplined studio work. There is plenty for the classic Prog fan but it isn’t a mirror of the past, it actually feels like it belongs in 2017 not 1973. This is slick where it needs to be and raucous at other times. I review every song of an album but feel the variation on ‘Clock Unwound’ needed just such a treatment. That is like quite a few of the albums made in recent years and proves to me personally that good and intelligent music can be produced despite being ignored in the boardrooms of the big labels of the world.