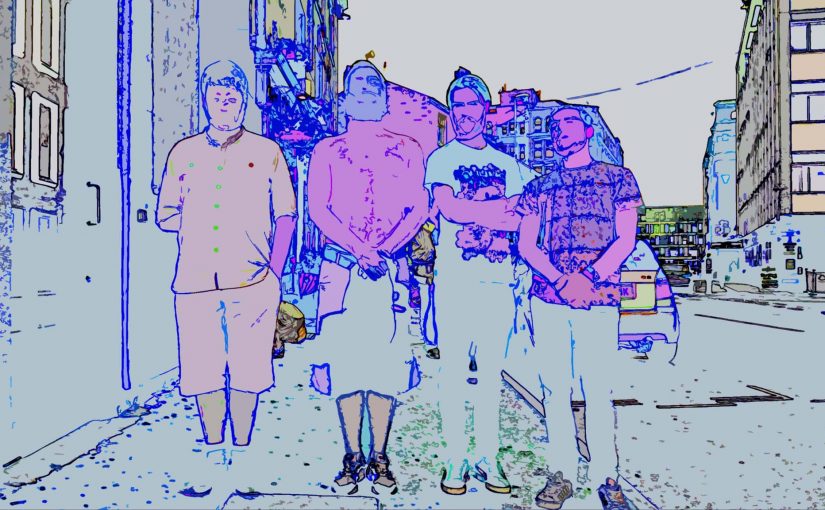 The task set by the wallet emptier was a simple one (which befits me, a simple man)

The implied threat of Sundry Sociopathic Pachyderms arriving “For A Quiet Word“ was implied rather than over stated.

And over-stated the opening track, GRAD isn’t: a few choice chords and an aura of menace (not to mention the sound of a drum kit being assaulted in the background!)

Track 2, The Ebb C/W Solotron (no, I don’t know what it means either!) Big minor chords summon us further into the Fukishima Surfer Social Club, the decor is a mix of King Crimson shabby chic contrasting with Leftfield Ambience – some beat friendly keyboard layers during the second track sent little waves of peace and chilled harmony across the room, the full 10-minute tour of the club passes by in a pleasant haze of keyboard driven chilled pleasure with flashes of guitar flavoured by Zappa and Hillage dotted in the mix, alongside keyboard bursts that could come from either ensemble . All this is underpinned by a rhythm section comprised 2 parts Kraftwerk to 1-part Yellow Magic Orchestra and 1-part Dr Avalanche.

Track 3, How You Gonna Get By?, is a bright and shiny duet between a pair of Android barkeepers vying for your drink order. Barbot #1 (arbitrary classification for ease of translation) serves up a cocktail of the Human League Synth sounds and New Wave vocals. pithy and punchy. Barbot#2 chips in every now and then with best harmony vocals that add a Sparks/Talking heads flavour to the drinks. Then the ghost of Kate Bush floats over the ice machine and the cocktail is twisted again, before a phone call distracts me from the final pouring of the cocktail.

Track 4, Herbie Hancock, seems to be produced by the drummer, or the rest of the band forgot to start with him, as the first minute of sampled and acoustic drums sets up for some funky instrumental film music piece, very Buck Dharma in tone, just without the squealing guitar or reference to giant lizards destroying Tokyo. Again, a hint of Kraftwerk as it all goes a bit autobahn at the end.

Zappa is the first name that comes to mind with track 5, The Modern Apothecary, imagine an English Zappa fronting a Prog Madness. Scoring a Spaghetti Western shoot- out. In a tricky time-signature. With a Gothic tinged vocal and an Eastern melody hidden by the guitar. The tune twists and winds around itself, with all manner of studio trickery thrown in. at some stage during the track, Madness have been transmuted into King Crimson. Eclectic indeed.

Next up, The Castle Of… starts off with brooding synths and plaintive voice accompanied by acoustic guitar, but the sonic architecture of the track lulls you into a false sense of anticipation. No huge epic, instead the track jumps into the next, I Wanna See My Daddy, which boasts a thumping drum sound, layers of electronica and a sad refrain of the title winding through it all. The voices are mixed low down at the beginning, then come charging in all Beach Boys harmony in the middle.

Pure Reason Revolution popped into my head at this point, and it’s an apt comparison as TH mix it up, bringing esoteric electronic sounds to the fore, UVB-76 coming on all Brian Eno meets Aphex Twin ambient before fading gracefully into the title track. Which has beautiful sinuous bassline, very Karn-esque in execution. The only criticism I can level is that the vocals are thin here, too high pitched for me, this could be the results of a life lived exposed to Tom Waits, David Sylvian and the like.

The track itself bubbles and flows on before segueing into The Wooden Wall, another association pops up in my head here – David Bowie, more specifically, side 2 of Low, those wonderful instrumentals that captivated me and opened my ears to all manner of electronic goodies, from the previously mention Kraftwerk and Y.M.O. to Tangerine Dream, Tim Blake, Future Sound Of London, This Mortal Coil and more.

All of these memories are triggered by this album. It’s a concept album without any lyrical link. The tracks flow and fit together well, leading you deeper into the world of the Trojans. It’s all very “New Wave” rather than “Punk” if you get my drift. Junk 1 certainly sets out this claim, with a guitar sound very reminiscent of Carlos Alomar’s amazing opening to “Station to Station” and big electronic drums that triggered the “Low” reference.

I’m amazed at the inventiveness and daring shown here, these Trojans are certainly not afraid to push envelopes, The Shapes is an exercise in studio trickery, with a narrator being bounced around the speakers whilst it appears that the Tardis is suffering from indigestion behind him. Either that or this is Vogon poetry set to Vogon music, which seems to take reference to early Depeche Mode and Jean Michel Jarre. The hypnotic beat and washes of keyboards take over and the track constantly changes, gathering depth as it goes.

The album closer, Monodaddy starts off in Granddaddy territory, with a reappearance of the “I Wanna See My Daddy” hook, but this time with a big beat and a sweeping musical backing .. glorious overdubbed harmony vocals floating in and out of the mix.

I’ve got to be honest here, I wrote this as I listened for the first time and once again, Bad Elephant Music have pulled the hat out of the Rabbit and have gifted me with an album that reflects my eclectic musical views. If there is a lack of Prog references in my scribbles, then that is how I related to the songs on offer here.If any of the bands mentioned in this review trigger a memory from you too, then you too should give this a listen or two.

Once again, the Curse Of Bad Elephant strikes as I’m going to end up buying this, then checking out their back catalogue.

Memo to self – negotiate a discount with the Boss Elephant!