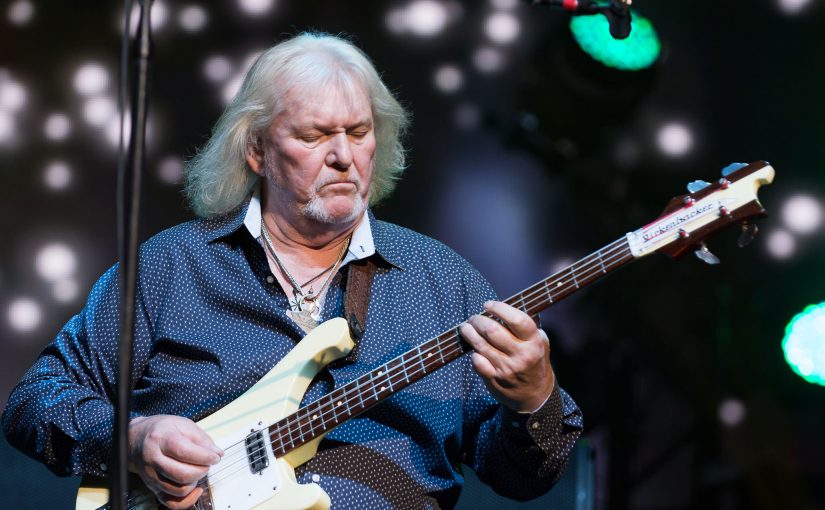 At the last count there have been about 1 million approx. solo albums (ed. – I think you may be exaggerating there James…) from various members of Yes in it’s variety of incarnations (although to be fair, most of them are by Rick Wakeman!) and, now while the band strides the earth in two distinct incarnations (the ‘official’ Yes, where Billy Sherwood has stepped up into the much missed Chris Squire’s boots  and Yes Featuring Anderson, Rabin and Wakeman), neither band has the anchorage or the sheer musical presence that Chris Squire had, the only man to appear on every Yes studio album and whose distinctive bass sound turned bass playing into an art, where it became more than just part of the back beat.

Billy Sherwood is excellent live at taking Chris’ place but there can only ever be one Chris Squire, Rickenbacker in hand, propelling the sound of Yes onwards.

Which is why, for my money, ‘Fish Out of Water’ is the finest solo album by any member of Yes ever released, it’s the finest album that Yes never released, and showcased Chris at his best. Here he takes on some astonishingly great sounds, aided and abetted by old Yes sparring partners Bill Bruford and Patrick Moraz, such luminaries such as Mel Collins and Jimmy Hastings and orchestral arrangements by old friend Andrew Pryce-Jackson. This is pure undiluted Squire, where he lets his vocals and his bass take central stage.

In fact, he didn’t sound as powerful and as energised as this again until on the Yes ‘Drama’ album from 1980.

This re-issue on Esoteric Recordings  is available in both a standard double CD set, which includes the original album and the new stereo mix by Jakko Jakszyk (complete with bonus tracks, the single version of Lucky Seven and Chris Squire and Alan White’s Run with the Fox/Return of the Fox single) or a deluxe boxed set that includes the CD but also replica 7” singles of the bonus tracks, the album on 180g vinyl and ‘Fish Out of Water’ in a new 5.1 mix.

The only quibble I have with this is that the 5.1 mix is only available in the far more expensive box, and for those of us who love the album but don’t need the vinyl or bonus 7” singles, the cost of the box to get the 5.1 is quite prohibitive.

Hopefully when the box runs out, there may be second run of the CD with the 5.1 disc as I am sure the demand for it is out there. Whilst some of the content (the interview with Chris Squire and track commentary for instance) is also on the 2006 Sanctuary edition of the album, the sound quality and remastering work is stellar. Where the Sanctuary copy fell was the sound of the album, it was very muddy, and the booklet looked like it had been run through a colour photocopier.

The mastering here brings out all the subtle nuances throughout the record and, of course, Jakko’s new stereo mix is a revelation, bringing new life into such epic pieces as the fantastic Hold Out Your Hand and You By My Side.

The two epics on this album were always Silently Falling, with it’s astonishing extended coda, and the orchestrally brilliant Safe (Canon Song) with its lush orchestrations taking up pretty much the whole of side two. This was true progressive music, none of yer regressive nonsense, this was Chris Squire pushing boundaries and making exciting dynamic and, on Safe, truly memorably moving songs.

You get the room for these songs to breathe and grow and develop, and the intricate sounds, subtle musical nuances, even the funk that’s on Lucky Seven (which to me was always the weakest on the album) has even grown on me and I can appreciate it a hell of a lot more than I ever did. Silently Falling for me is the centrepiece of this album, and oh, I would have loved for Yes to take this and make something of it as well (not that there is anything wrong at all with this version, far from it, but to hear Squire and Anderson singing on this together would have been amazing).

The 5.1 is even more astonishing, like King Crimson, Gentle Giant and, indeed, Yes, 5.1 is the music system progressive music was built for and, of course, Esoteric have a great track record in 5.1, as the Hawkwind ‘Warrior at the Edge of Time’ and the recent Barclay James Harvest re-issues show. It is a truly immersive experience for the music lover and it feels, just for the length of the album, that Chris Squire is in the room with you, that this is a private performance just for you, the sound of Silently Falling in 5.1 sending tingles down the spine. The whole mix is revelatory, there is so much more going on, and the mix is beautifully organic, pulling the sounds to life without ever compromising the album.

For those of you who already have this album on CD from previous below par re-issues and indeed the original vinyl and are wondering if it is worth getting a copy, I would say the sound has radically improved over any previous CD version and the Jakko stereo mix is revelatory. If you were thinking of the 5.1, which is on a par with the wonderful 5.1 version of ‘The Yes Album’ by the way, then you would have to look at your budget and decide if it is worth having,  complete with the vinyl.

This is a legendary ground-breaking record, from a legendary ground-breaking musician and, other than a Christmas record (the amusingly titled ‘Chris Squire’s Swiss Choir’) stands as the solo testament to Yes’ anchor. Maybe it is so good because he never made another, not knowing the man I couldn’t speculate on why not, maybe he felt he’d said all he needed to say solo, or perhaps he felt more comfortable within Yes, who can say? However, as one of the most innovative and distinctive musical forces in music, and a year after his untimely passing, this remaster is the appropriate way to celebrate his definitive musical statement.