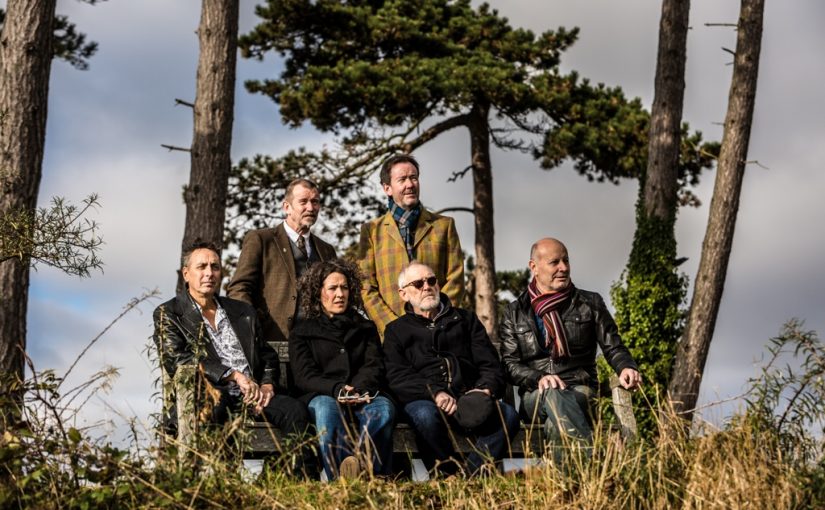 6174 – there you go, 6174 apparently is virtually always the Answer using Kaprekar’s Constant, which may lead some to ask what is the Question? … and what does it have to do with a new Kent based Progressive Rock band, featuring David Jackson, once of veteran ‘Prog’ greats Van Der Graaf Generator? Who knows?

‘Fate Outsmarts Desire’ is their interesting and rather impressive debut album, written and largely played by multi-instrumentalists Al Nicholson and Nick Jefferson, who formed this project in 2015. Why they have the rather peculiar band name is rather a mystery but research shows that ‘Kaprekar’s Constant’ is a number theorem devised in 1946 by an Indian mathematician in which the answer is virtually always the number 6174 in no more than 7 steps… all rather mystifying but you can google it as well if you’re really interested!

Strange as it may seem, the choice of the band name indicates that this is a group with an interest in enigmatic curiosities and history, which imbues the atmosphere of this album. The stark and memorable opening lines of this album:

make an immediate statement that this is a work steeped in atmospheric historical narrative. Hors D’Oeuvre effectively acts as a promising overture for the album, referencing elements of the longer pieces to come, and David Jackson evokes slight hints of A Plague of Lighthouse Keepers by VDGG with his distinctive droning sax sounds.

Perhaps the strongest and most memorable composition on the album is the elegiac Hallsands, (but I may be biased as I live very close to that beautiful but tragic location!) A fine song based on the true story of the negligent environmental disaster visited upon a South Devon village by rapacious developers who stripped a shingle bank protecting the village to provide material to build the docks at Devonport in Plymouth. This led to the eventual collapse of the whole of Hallsands village in to the sea in 1917 – perhaps a lesson for modern times and it’s exploitation of the environment. The music is suitably nautical and evocative of a simple seaside community falling victim to thoughtless dredgers. Paul Gunn provides some thankfully brief narration interludes, but the main impact is conveyed by the folk tinged fine vocals of Bill Jefferson, conveying more than a little anger and bitterness. Acoustic guitars with whistles and flutes conjure up the simple seaside community, ultimately destroyed by

“arrogant lies… the beach went to Devonport, the houses went to the sea”.

Epic in length and evocative in nature, Hallsands holds the attention and touches the emotions with skillfully composed music which very successfully conveys the images atmospherically. Contrasting simple acoustic passages, reminiscent of Jethro Tull in some ways, with more discordant storm driven percussive sections, Hallsands is one of the main highlights of this album, successfully describing a captivating and instructive story in our recent history.

Real US police radio conversations introduce and underpin the remarkable Four-Faced Liar. Inspired by much more recent events, the story of the capture of the Boston Marathon bombers is conveyed in a fine lilting melodic rock song, sung perfectly by Bill Jefferson, backed colourfully with some well judged keyboards and string sounds. The events are described from the perspective of the Clock of the Boston Custom House, called the Four Faced Liar locally as none of the clock faces tell the same time. Maybe that is a metaphor for the different perspectives on how one story can be reported, or may just be an interesting local detail for a band that evidently likes idiosyncratic stories from reality. The relative brevity but excellence of this song is a reminder for progressive rock bands that sometimes ‘less is more’. Pearl of the Lake features Dorie Jackson (daughter of David Jackson) on some lovely vocals in a much shorter and simpler song, relying purely upon the strength of the melody and the lyrics to express itself. Dorie Jackson takes lead vocals for the epic concluding piece, Houdini – King of Cards, based on the renowned escapologist. A possibly over extended first lyrical section sets the scene before giving way to an instrumental passage, combining keyboards and saxes possibly conveying the peculiar atmospheres of séances. Houdini was very skeptical of tricksters in his life time, but wondered if he could effectively ‘cheat death’ by communicating with his wife Bess after his death. They agreed on a very personal message between them that he would try to communicate from beyond the grave. Bess started the tradition of spiritualism sessions to see if her husband, the man who could escape from any jail, managed to escape death. For 10 years after his death Bess organized these sessions without receiving a sign from her husband, and then ceased them convinced that even he could not cheat death. The closing melodic section is sung beautifully by Dorie Jackson over a slowly building backing, with her father adding some effective woodwind. The apparently real archive spoken parts from that era are interlaced with this song, and add an eerie and authentic element to the narrative. In contrast album opener Bluebird demonstrates for me just how NOT to use spoken parts!

Based on the story of Sir Malcolm Campbell and other high speed motoring pioneers Bluebird is introduced and constantly punctuated by short explanatory spoken parts by Paul Gunn, which are clearly delivered in a tone intended to sound contemporary to the story… but have the unfortunate effect of sounding like the rather pompous Harry Enfield comedic character ‘Mr Cholmondley-Warner’. The music is melodic progressive rock imaginatively expressing the events, including the dramatic journey of the car ‘Babs’ along Pendine Sands in Pembrokeshire. A restrained but expressive guitar carries the middle section, alongside Jackson’s saxes and flutes. This is an ambitious song of nearly 18 minutes full of some finely played music, but one has to wonder whether there was enough narrative to justify such an epic treatment. Just when you think it’s over Gunn’s voice pops up to let us know the story was moving to the next stage. This is a clumsy device which for me distracted from the music – it felt like I was looking at a lovely painting in a gallery and then suddenly a tour guide stands in front of it telling me what I am seeing, but now cannot see because the guide is in front explaining it to me! The whole song feels episodic and rather a history lecture, which is a pity as there is some good music on this piece. Perhaps this new band needed to rely less upon the ‘Basil Exposition’ type interludes and really trust much more in the imaginative power of their music. However, it would be grossly unfair to focus on this flaw, (which explains why the first song on the album appears at the end of the review), rather than commend Kaprekar’s Constant on what is undoubtedly a very promising and good debut album.

They are clearly talented musicians and singers with a mission to entertain and inform with fascinating stories and melodic rock songs. Their historical narrative songs are clearly in the same territory as the eminent band Big Big Train, but let’s not forget that a band such as Big Big Train took quite some years to mature and develop in to their current excellence. If Kaprekar’s Constant continue to develop their evident melodic sensibilities and further hone their songwriting craft they have the potential to offer much more to Progressive Rock. To think that this is a debut album is remarkable…

… now what was the question again?