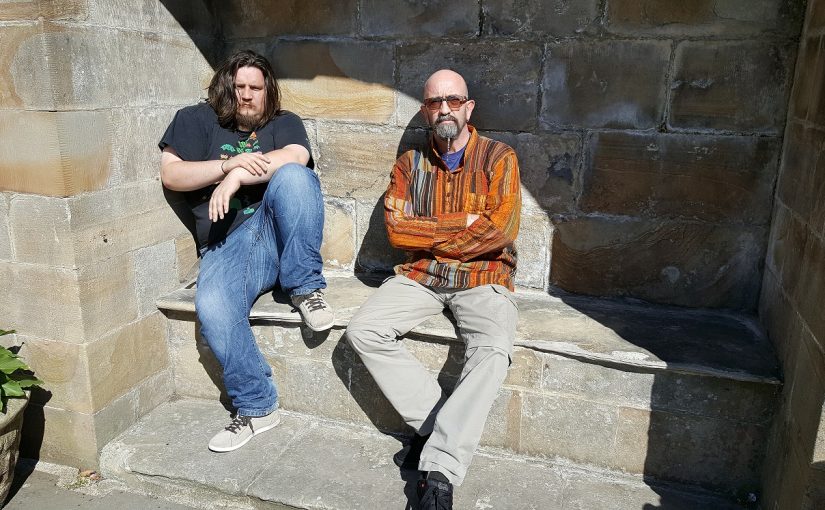 “Discovery is a conceptual piece, a journey through time and space, but also a journey through our own lives. The music is progressive with moments of heaviness,ambient elements and gentle, emotional soundscapes fused with electronic drums.”

And so says the PR information for Stone Angel Syndrome’s debut release, one I’ve had the pleasure of seeing come to fruition for Kevin Burlison who, along with Dave Blackburn, is the driving force behind this interesting project. The album was written while Kevin was going through some difficult experiences in his life (I’ll say no more as that is not my story to tell) and you can tell he has put his heart and soul into it.

Kevin provides keyboards, synths, piano, harpsichord and hammered dulcimer, Dave all the electric and acoustic guitars. Martyn Leckenby is now the full time bassist and also helping on this release were Andy Plemper (sitar) and Chris Davison with vocals on the title track and who also provided mixing duties.

‘Discovery’ is a challenging release, intelligent music that takes some digesting and understanding. The ambient arrangements are reminiscent of Tangerine Dream and Jean Michel Jarre (just check out (and the planets dance) in the Dark Eternal World and you’ll see where I’m coming from), floating in a vacuum with the whole Universe in front of you, your mind an open book.

The band have thrown in a bit of a curveball on the first two tracks, A shadow over sunrise & Trans-lunar express, where the lush textures and atmosphere segue into something a lot harsher and darker, like a jam session involving Edgar Froese and an early iteration of King Crimson. The music jars and crashes creating a stark and demanding soundscape that really asks questions of the listener. To my ears it works incredibly well but, to be fair, it is not for the faint of heart and your heart rate does come back to normal when the wistful scenic music returns.

The only vocal track on the album is the title track, Discovery, which closes this intriguing and soul-searching musical journey out with something more akin to classical neo-progressive rock. It’s a calming and contemplative piece of music that lends an almost spiritual feel to the album and left me in an incredibly thoughtful and reflective frame of mind.

A collection of songs written from an intensively personal point of view that leaves a raw and honest feel to an album that requires more from the listener than you would normally expect. Ultimately it is an incredibly rewarding experience if you’re prepared to go beyond your usual boundaries and I highly recommend it.