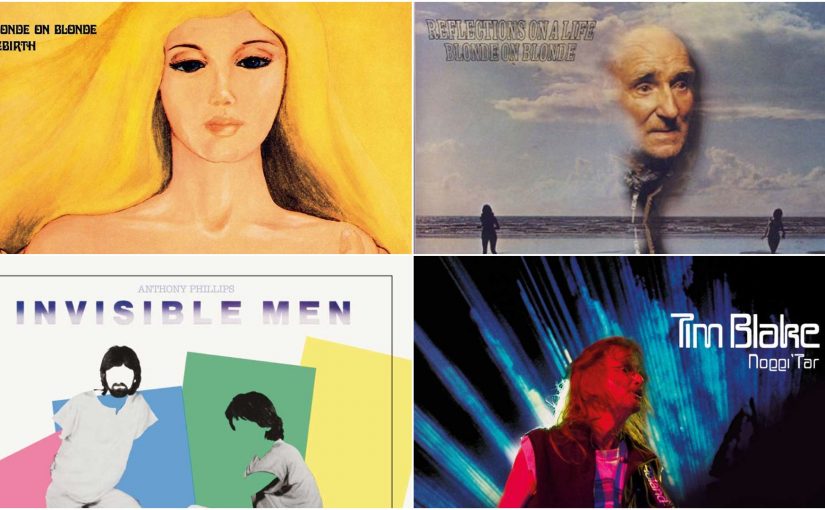 This time round, those busy people at Esoteric have been rooting out some of the best albums you’ve never heard to continue building an amazing archive of lost acts, those who were fantastic and never quite made it.

For every Yes, there’s about half a dozen no’s littering the path, who, for whatever reason (bad management, no record label support, right album wrong time), never hit the history books. Released in 1970, ‘Rebirth’ was the second album from Welsh prog band Blonde On Blonde. Having returned to Newport after they weren’t making enough cash in London, the band signed with Ember records (home of BB King & Glen Campbell at the time) and with new vocalist, 18-year-old David Thomas, the band set about crafting this masterpiece.

With effusive sleeve notes on the original album from the effusive Tommy Vance (who was a big supporter of the band) this experienced live act, who had played the Isle of Wight Festival twice, brought all their skills honed on the road into the studio.

As the band freely admit in the sleeve notes the opening Castles in the Sky (written by Eve King & Paul Smith) was included on the album at the behest of a BBC producer John King who had got the band a showcase performance on a BBC Bristol TV show, and his wife wanted to be on the album. Blonde On Blonde (yes, they were named after that Dylan album) didn’t feel it representative of them, though overall as songs go, it is of it’s time. However, if you feel it jars then we have the beauty of the CD skip button.

The band had been compared to the Moody Blues but that did get used quite a lot when you have a band who are rock in their outlook and symphonic in their vision.

The band, Gareth Johnson on guitars, Richard Hopkins (bass, organ) and Les Hopkins on drums, had a wide musical palette to draw from, having been influenced by the R’n B scene and with taut instrumentation, great vocals and an ear for a melody, I find they fit into areas Wishbone Ash would sit in. With some sublime extended work outs on tracks like Colour Questions and Time is Passing, they showed a maturity of song writing, whilst the closing piano driven You’ll never Know Me/Release, with it’s wonderful vocal refrain and driving beat, is a real delight for anyone who appreciates good quality classic rock and the powerful musical coda is up there with anything else recorded in this period.

These guys were the real deal, and as the band grew in musical power they really pushed the boat out on their next album.

Blonde On Blonde – Reflections on a Life Released in 1971, the epic ‘Reflections on a Life’ saw another change in personnel as Richard Hopkins moved on to be replaced by Newport based guitarist Graham Davies who also added bass, acoustic guitar, banjo and vocals.

Now with the music written by both Thomas and Johnson, this epic collection of tracks that widens their musical horizons more with blues, country music and more, is a conceptual song cycle telling the story of someone’s life from birth to death. Recorded at the legendary Rockfield studios and on a tight budget, the band utilised all their creativity and, indeed, turned in a fantastic collection of songs dealing with some seriously dark lyrical matter tied to some wonderful rock. The powerful driving rock of I Don’t Care, all about incest, contrasted with the wonderfully mellow blues folk of Love Song.

The band really took the ball and ran with it, despite, or because of, the disdain of the record label. They threw everything into this album and, with tracks about family murder (the nicely ironic Happy Families), the incredibly experimental Gene Machine and some suitably iconic artwork, it makes for a fantastic listening. The addition of Graham Davies helps widen their sound, bringing a fantastic vibe to tracks like Bar Room Blues and The Bargain.

This has some fantastic musical moments throughout and a great set of lyrics as well, superbly observed and well written. From it’s striking cover to it’s brilliant contents, this is a fantastically well-made record and was, musically, the last recorded statement the band made. Having lacked record label support, slogged their hearts out on the road and never achieved the success they deserved, the band had dissolved by 1972.

Now this can be reappraised and enjoyed, especially by anyone who likes a well written, tightly produced exciting journey, that mixes musical genres and showcases the bands versatility.

Reflections On A Life: Remastered and Expanded EditionBlonde On Blonde Esoteric are continuing their extensive and comprehensive reissue of the Anthony Phillips back catalogue and this release, originally from 1984, marries up the two versions of ‘Invisible Men’ including the respective tracks missing from the American and UK edition, as well as a second disc containing alternative songs and demos from this period in Ant’s career.

Persuaded by his management that he needed to do something a touch more commercial, Ant and collaborator Richard Scott had developed an excellent working relationship and the use of a drum machine to underpin the songs.

As a result, the lush orchestration of some of Ant’s earlier albums is replaced here by a harder edged sound that is entirely of it’s time. However, don’t let that distract you from the music as Ant has always been a fantastic songwriter. Writing with Richard Scott, the two developed an excellent working relationship, and this album is well worth investigating.

From the incredibly 1980’s cover which mixes their promo photos with all the visible skin removed and the bright colours, to the programmed drums, this also sees Ant taking vocals on for the first time and he has a fantastic voice which really comes to the fore on the lovely Traces.

Meanwhile, influenced by outside events, both The Women were Waiting and Exocet (the latter featuring the sample of Iain MacLeod) are highly charged comments on the Falklands War, whilst the wonderful Going for Broke is proper old school prog, with some fantastic guitar work for Ant, and is a successful mix of the old and the new.

The blend of guitar and flugelhorn on Falling for Love provides a sublime musical moment whilst Sally is a slice of pure 80’s power pop that has a great blend of synth sounds, vocal power and a pure 80’s sax solo, it could have been used in any number of 80’s movies.

The second disc (complete with the copious sleeve notes) has some interesting different versions of album tracks like Falling For Love, Golden Bodies and My Time Has Come. Other tracks recorded over the same period are just as fascinating including tracks like Darling and Shadow in the Desert, being almost finished and never heard before.

Whilst this might not be the first place to start looking into the work of Anthony Phillips, it certainly shows his experimental side and that, as a musician and performer, he isn’t prepared to stand still. Whilst sometimes the drum machine does slightly jar (and you wish for some real live drums), overall this is a fantastic collection of complex pop/rock songs that are very much of the era they were made and yet still shine over 30 years later. Influential electronic musical pioneer Tim Blake has performed with both Gong and Hawkwind and is, to my mind, more influential in electronic composition than his French contemporary Jean-Michel Jarre.

Blake released some fantastic albums in the 1970’s and in the current century worked again with both Gong and Hawkwind. He decided that, on this album, he should be the lead guitarist on an electronic record with no guitar, hence the title, a wonderful little pun, and, whilst this was originally recorded and released back in 2012, it never had a physical release, being a digital only album.

Marrying the old and the new is something Tim has always been good at, right from his Crystal Machine and Blake’s New Jerusalem days, where he was at the cutting edge of electronic music (if you don’t own those albums, hunt down the Esoteric remasters, they are essential to any fan of electronic music).

The four tracks on here are, again, the pinnacle of how electronic music should be done, the conceit of using the keyboard as lead guitar is one that works so well and, of course, we know what a Master of Music Blake is.

It could have ended so differently had Blake not survived the car accident, the resuscitation and the subsequent three-day coma that Blake references here in The Blue Light Zone, where he pulls all aspects of his subconscious together in a sublime electronic journey.

The songs, over less than 40 minutes, are ambient, transcendental and are a real musical journey. Working hard here he makes it seem effortless as The Arrival of Migratory Cranes segues into Absent Friends, rounding out with Contemplating the Southern Cross.

There might be no guitar on here but, putting the keyboard in place of the guitar is a masterpiece, he uses it to create riffs, runs and moments, and front the whole album, whilst the mighty wall of synth sounds that washes over you is sublime.

This is electronic music at its finest, a fantastic example of how composer and instrument can become one and take you on a sonic journey that leaves you exhilarated and wondering where the time went.

I love this and highly recommend it.