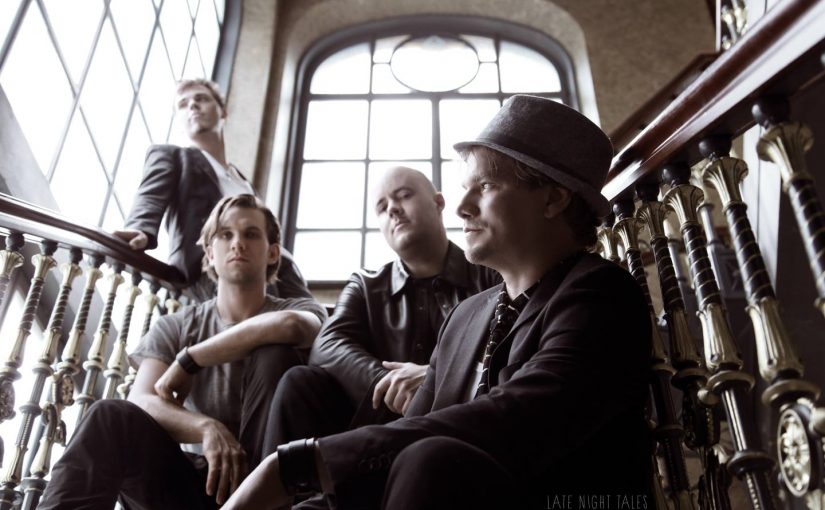 Indulge me, if you will. Imagine a School of Rock but based around Progressive Rock and all its associated sub-genres. What classes would take part in there? Intricate guitar solos?, mind-bending keyboards?, fantastical lyrics about orcs and fairies?

And what artists would have attended this august establishment? Could Yes, King Crimson, Pink Floyd and Genesis have been some of the star pupils and then prefects as the likes of Marillion, Pendragon and then Porcupine Tree became the next young minds, eager and willing to learn?

Well, if there was a class in the modern version of the school for ‘huge and extensive riffing’ then Augsburg’s DANTE could well be at the top of the class. Having listened to ‘When We Were Beautiful’, their follow up to the impressive ‘November Rain’, I cannot help but notice the huge, mountain sized guitar riffs that emanate from the majority of the songs.

It is not overpowering but it is definitely one of the main features of the record and this band, the other being the, possibly, controversial cover…

Is a half naked woman acceptable on the cover of a relatively mainstream record in this day and age or is it just not politically correct? Well, the cover to DANTE’s certainly stimulated some heated debate when it was shared on social media. To me, I feel it just about stays on the right side of being a bit sexist and, in reality, we should not let it detract from the main question, is this album any good……….? The release of the last album was clouded by the death of co-founding member, and bass and guitar player, Markus Berger. That is how death not only became a topic of the new album but also the driving force of the creative process, expressed in songs like Finally, where the band bid farewell to their friend in a harrowingly beautiful way.

‘When We Were Beautiful’ is released through Gentle Art Of Music. Right, onto the main course and the seven tracks that make up the album…

Rearrangement Of The Gods opens with an ominous note, a brooding tone before Christian’s drums herald the appearance of the first tasty riff. The guitar wails with a plaintive note, a slight dissonance or a cry for help that pierces your mind. A convoluted and intricate progressive section follows before overlaid voices take up the mysterious narrative. Alexander’s distinctive vocal joins the fray, backed by that insistent heavy riff. He has a voice that could divide opinion, it is harsh and straightforward but I feel it matches the music perfectly with its almost industrial tone. He shows he is no one trick pony on the impressive chorus where his voice opens up magnificently to harmonise with the others. It’s quite and insistent track on the verse, driving you back like a finger poked into the centre of your chest but opens up into a huge soundscape everytime the superb chorus makes a return. Throw in some excellent keyboards, especially on the vibrant and energetic solos, and some combustible guitar licks and an extended and rather fiery solo and you have a rather intense and powerful opening to the album. A rather catchy, addictive and heavy riff opens Ambitious with a wry smile and a wink, hard-edged drumming and a forceful bass line add a solidity and a burst of 70’s keyboards give it  a knowledgeable air. The vocals come in with that assertive and emphatic edge. A dark, dense and monumentally hefty song that somehow still seems light on its feet. It bludgeons its way into your affections with its direct heavy metal edge yet, the short, elaborate guitar and keyboard/piano runs and the chugging, industrial instrumental sections keep its progressive roots firmly on show. Monster riff? go on then, the opening to Beauftiful Again nearly knocks you off your feet with its ferocity. A labyrinthine and heaving metal maelstrom that feels like it carries the weight of the world on its broad shoulders. A real progressive melting pot that cools down slightly for Alexander’s vocals to take the lead. Earnest and pleading, he gives some real gravitas to the song. The harmonised chorus is really rather superb and gives an excellent counterpoint to the imposing might of the guitars and drums. It’s like a musical version of a scorched earth policy, removing any unnecessary detritus from its path as it fires through. DANTE show they are more than just some notable riffing as a delicate piano note descends upon the track, catching you unawares, before drifting away as the influential wall of sound returns. There is a heartfelt feel to the vocals and piano at the start of Until The Last Light Breaks In, giving you pause but, what’s that? yep, you guessed, another towering, hell for leather riff takes over, aided and abetted by some harsh keyboards and we are off on another riff-fueled musical white water ride. A fleet footed and convoluted instrumental section threatens to overwhelm you before things calm down a little. There’s a passion in Alexander’s voice that matches the fervency of the music and it rises and falls in both tempo and emotion. A seriously involved and emotional listening experience that includes some ferocious and potent guitar work from Julian (the solo is actually mind-bending) and leaves you feeling both sated and drained as it comes a to a close. There’s a mysterious feel to the beginning of Let Me Down, it stutters slightly with an electronic and industrial resonance. A staccato riff powers in, along with some Hammond organ, to give it that hard edge again. This whole section has a feel of some virtuoso musicians having a rather exciting jam session and you nod your head in appreciation. The vocals have a profoundly heavy character to them as the song keeps moving off into distinctly prog-metal territory. Weighty guitar riffing and drums that could knock an elephant off its feet give the song a real density at its core, like both the immovable object and the irresistible force. Julian is given free rein and makes the most of it, his guitar playing is immense on this song and leaves you almost slack jawed and this is matched by Markus’ utterly absorbing and exuberant keyboards. I bet this track would be awesome live. Sad Today  is the shortest track on the album but, perhaps, the most profound. A gentle piano and tender, compassionate vocals give you a lump in your throat. A song like this could feel a little out of place among the heavy riffs and thunderous rhythms but the band carry it off perfectly. Wistful and serene, it leaves you rapt in a sad and nostalgic atmosphere. Rather profoundly, the last track on the album is Finally. Electronic sounds open the song and then Julian hits you right in the solar plexus with a huge riff. The song erupts with the drums driving things along, adding a steely edge to the coruscating guitar work. A whirlpool of progressive tinged musical chops holds you in its sway, keyboards swirling around your head and the guitar seems like a barely tame wild animal seeking to escape its cage. The vocals seem to bring order tot he chaos, Alexander taking centre stage and dominating proceedings while that melting pot of musical virtuosity carries on behind him in a slightly subdued manner. Yes, it is still a heavy song but it has a aged feeling of experience and patient wisdom. The guitar fires at you, over laid by a jumble of spoken voices, the chorus is quite addictive in its emphatic delivery and you get a feeling that the whole album has been leading up to this final outpouring of emotion. You have to applaud the excellent musicianship going on between your ears, these guys can really play their instruments exceedingly well, emphasised every time they decide to go off on an absorbing progressive jam (which they do frequently). As this song (and album) come to a close, it is the farewell to their fallen friend that takes over and the passion, pride and grief are all too evident, especially on the solo that is full of fervor, remorse but also love and joy.

Slightly controversial cover aside, ‘When We Were Beautiful’ is a superb and fitting tribute. The music is not dominated by the plethora of riffs, rather it is accentuated and complimented, these guys are outstanding musicians and it is evident in every note that they play. If you like your progressive metal with a little something extra, you are going to love this album, I did.

Buy ‘When We Were Beautiful’ direct from the band