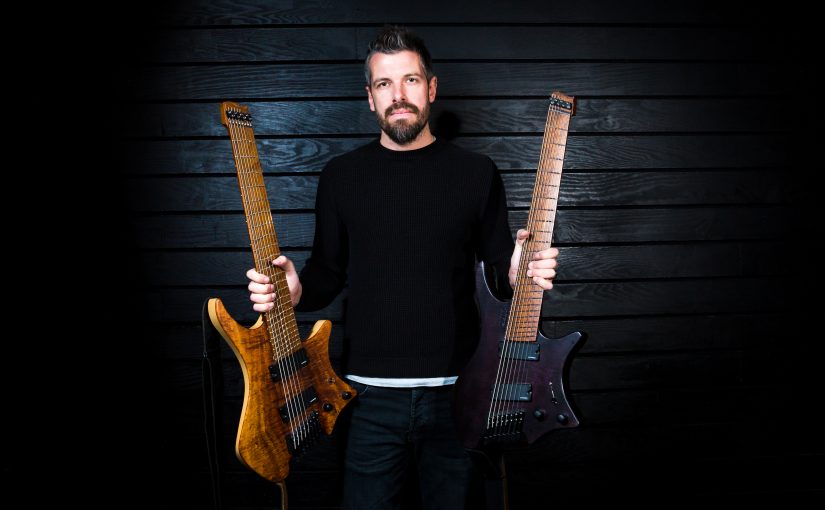 “Acclaimed for his work as a founding member of prog metal standouts Haken, as well as Nova Collective, Mike Portnoy’s Shattered Fortress, and as a Strandberg Guitars associate artist, Richard Henshall is now prepared to release his debut solo album, ‘The Cocoon’.  Consisting of eight tracks that range from dense polyrhythmic passages to delicate minimalistic interludes and everything in between, ‘The Cocoon’ features Henshall’s trademark guitar and keyboard playing throughout, and marks his debut performance as a lead vocalist.”

I was intrigued when I heard that Richard Henshall was releasing a solo album, I’m a big fan of Prog-metal behemoths Haken and a major factor behind their success and sound is this talented musician.

There’s no getting away from the fact that this does sound, in parts, like a Haken release but that’s not a criticism, the song composition and musical variety on show will not only appeal to fans of the band but also bring in a wider audience. The rhythm section is composed of Conner Green (Haken) on bass and Matt Lynch (Cynic and Nova Collective) on drums who bring a unique, energising approach to the record.

Richard calls on a plethora of musical guests who add their own individuality including Jordan Rudess, Marco Sfogli and Haken vocalist Ross Jennings and this gives a very different feel to that of the last Haken offering.

The album opens with the introductory instrumental “Pupa” which transforms from calm and collected to frenetic and energetic before seamlessly integrating with “Cocoon”, a ten minute musical foray into dense polyrhythmic passages and short, frantic staccato bursts that throws the listener right out of kilter, the King Crimsonesque saxophone from jazz aficionado Adam Carillo is suitably mind bending and brilliant.

“Silken Chains” provides a calming influence and really showcases Henshall’s impressive vocal skills. Following the low key intro, an upbeat, almost pop infused vibe runs throughout the song with the pared back vocal and edgy rhythm and the guitar solo from guest David Maxim Micic is just a delight to listen to. “Limbo” is a short musical interlude with pared back vocals and hushed tones that gives an almost industrial feel.

To this reviewer “Lunar Room” channels Linkin Park and Eminem with its Nu-Metal/Rap vibe and notable vocals from Ben Levin and Jessica Kion and really gives this album its own sense of identity. The dense musical passages contrast perfectly with the deliberated vocals, it is intelligent and thought provoking and contains yet another impressive guest solo, this time from prog-metal legend Marco Sfogli. It is about this time that I realised how engrossed I had become in Richard’s creation, a testimony to his skill as a songwriter.

Perhaps the most Haken-like track on the album, “Twisted Shadows” sees Richard collaborating with his Haken band mate Ross Jennings who provides a powerful, polarising vocal performance. The song seems to skit through the verse, edgy and restless, Jennings providing just the right amount of unease and Henshall’s guitar a willing collaborator. The dominant chorus seems to erupt almost out of nowhere and Jordan Rudess turning up to add his signature keyboards makes the track a captivating and coruscating musical journey.

My favourite track on the whole album is the wonderful “Afterglow”, I just love the whole feel of this song, like a beacon of light in a world edging every closer to darkness. The humble guitar, uplifting keyboards and Chris Baum’s strings add a soulful tinge before everything breaks out with an outpouring of hope, like the sun rising above the horizon to signal the beginning of a brand new day.

The Cocoon is a truly impressive release and one that shows Richard Henshall at the height of his creative powers. He takes the influences from his time in Haken and Nova Collective and fuses them into something truly individual that can sit astride the progressive and metal genres with equal appeal and that is not an easy thing to do.

The Cocoon is available from Burning Shed: