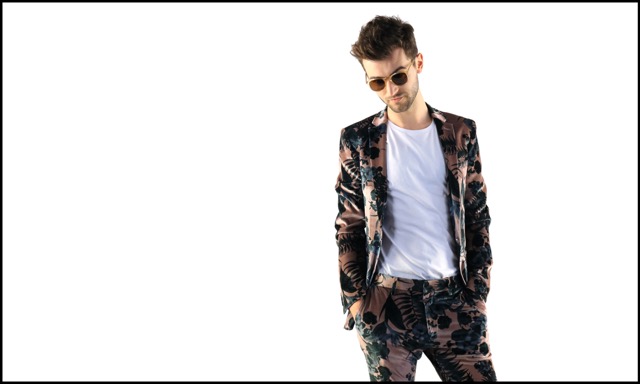 Charlie Barnes has announced ‘Oceanography’, his second album for Superball Music. The follow up to 2015’s post-pop monster ‘More Stately Mansions’, ‘Oceanography’ finds Barnes in a different place in his life. The past two years have seen huge change for the musician, he has spent the majority of his time on the road as a touring member of Bastille, performing on some of the biggest stages in the world and travelling all over the globe as well as getting married and relocating from Leeds to the Midlands.

In contrast to his previous LP – largely recorded in one place with producer Oceansize guitarist Steve Durose – ‘Oceanography’ is a story of snatched moments after tour rehearsals, late nights spent in far flung studios from Wales to Virginia, ideas sent back and forth over email and put down in fits and starts while on the road. At points it seemed like it would never come together, so it’s some achievement that it not only matches the attention-grabbing maximalist prog-pop of ‘More Stately Mansions’, but builds and expands on that record’s foundations.

“The last few years have been totally bonkers,” admits Barnes. “I was rarely at home, so I was doing a lot of arrangement work in dressing rooms and hotels on a tiny keyboard. I eventually took to carrying recording gear around with me so that I could make the best use of any free time.”

Barnes had consciously decided even before joining Bastille that he wanted to make an album more honed and streamlined, so it is that much of ‘Oceanography’ is built around pop hooks that although vast in sonics are earworm tight in their structure. There is a more consistent palette of sounds used throughout, with songs comfortable in shifting between newer synth explorations and reverting to long-held influences Oceansize and Amplifier – shining particularly prominently on tracks like Ruins and Maria.

However, there’s no getting away from the impact that working with one of the UK’s biggest touring bands has had on his work. For one thing, Dan Smith himself pops up on backing vocals on Will & Testament – a track that arguably stands out in its pared-down synthetic feel compared to the string-tinged rock grandiosity of much of the rest of the album. Smith’s inclusion came after he’d asked to hear what Barnes had been working on while out on tour with them, but his mark on the album is more diffuse that a guest cameo: “Being with Bastille during the making of their second album, I got to hear how some of those songs took shape over time, from small changes to entire reworks” he says. “I think that helped me to be a bit more cut-throat with my own songs and try to streamline things a bit.”

Charlie has also shared the first single & video to be taken from  ‘Oceanography’ which is due out on Superball Music on the 9th of March.

‘Oceanography’ will be released on Superball Music on the 9th of March 2018 and can be pre-ordered now from here.

A full-band UK tour will also take place ahead of the album’s release.

Some words from Charlie on the new tour –

“I’m fully blown kid-in-sweetshop excited about these upcoming dates.  It’s going to be a little bit different to anything I’ve done before, so expect to see some new faces (well, one new face…), and the occasional support slot from another familiar face (my face, doing something else).  These will be my first live performances with a band since my mate Alex’s wedding a couple of years ago where we played a load of (superbly curated) cover versions (Biffy, Wheatus, Bowie…), so I’m definitely feeling the nerves about getting back to frontman duties.  It’ll be okay.  Right?  Come and say hello.  We’re very clean.”

Tour dates are listed below –