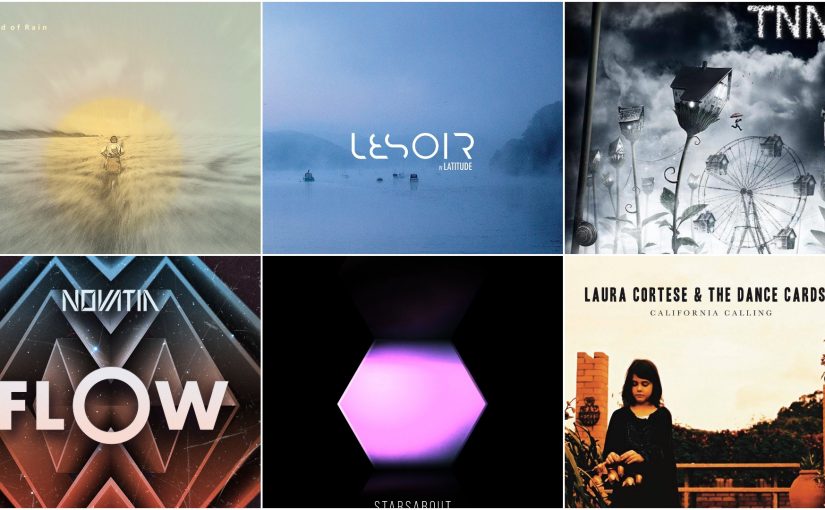 Welcome top the third outing for The Wallet Emptier’s Round Up and the music I think you should be listening to this time is from Band of Rain, Lesoir, TNNE (The No Name Experience), Novatia, Starsabout and Laura Cortese & The Dance Cards…

I have also added a link to buy the album, if you are so inclined and if I can find one! Band of Rain – The Dust of Stars

There’s some power behind this album, it may be supposedly ‘haunting, ambient and largely instrumental rock music’ but Band of Rain imbue it with a hard-edged soul epitomised by long-term band leader Chris Gill’s dynamic and strident guitar style. His partner in crime Micha Steinbacher adds the requisite haunting atmosphere and they deliver some pretty intense musical soundscapes.

Ria Parfitt adds her quirky vocals to the title track and the in-your-face Toys (where Chris really lets loose with the six string) and prog stalwart Gordo Bennett contributes a superb ethereal guitar solo to Ancient Electric, this album keeps delivering at every turn. Just check out the eclectic flute work on the ambient beauty of Indian Summer and be mesmerised by the lush musical tapestry that Band of Rain have woven. Dutch band Lesoir have lofty ambitions, they want to aim for the bigger picture and deliver something more than your average art-rock album. ‘Latitude’ delivers a fragile beauty, music that inspires and transcends, an album full of soaring soundscapes and one that majors on subtlety rather than blunt rage.

Maartje Meesen’s voice is emotive and passionate, just check out opening track Modern Goddess, to see what I mean. To quote the PR:

‘Lesoir fuse the beauty of melancholy with a rugged maliciousness of an unforgiving wasteland. The Result is music that is as impressive as it is touching.’

I see similarities with German art-rock pioneers Frequency Drift, a cinematic quality to the music that gives the music an expansive feel and the recruitment of Bruce Soord as co-producer seems to have been a masterstroke and gives the music a three-dimensional atmosphere.

Favourite Track – The magical and mysterious In Their Eyes. Neo-prog from Luxembourg? No, I didn’t know there was such a thing either but here I am listening to TNNE’s 2017 release ‘Wonderland’ and a lovely thing it is too. Any album that can call on Chilean guitar legend Claudio Cordero of Cast fame has a lot going for it before even the first note is played. I then hear the great sax playing on opener My Childish Mind and I’m in for the ride.

There’s something a bit extra to this release too though, it’s not Neo-prog by numbers, there is more warmth and emotion, perhaps a product of Patrick Keifer’s sublime vocals, and sheer joy in the way the musicians deliver the powerful rhythms and playful keyboard melodies. Add in Claudio’s famed guitar solos and you have a collection of songs that connect and involve you from the start to the end. Novatia’s third E.P. ‘Flow’ is an artfully constructed mix of pop, rock, jazz and funk, along with more than a liberal dose of progressive rock. As the title would suggest, the band have created an album that flows from the first track to the last, each song complimenting the others. This was a deliberate part of the songwriting process where the intention was to create five songs that are both musically and lyrically connected by one theme.

Stylish guitars and a thumping bass are the base on which these tracks are built on and the impressive vocals add a polished sheen to the finished product. That doesn’t mean that they are lacking in emotion though, there’s a piece of each of the band in every track, they come from the heart and soul and that is evident as you listen and partake on this involving, flowing journey. This is the second outing for Poland’s Starsabout on The Wallet Emptier’s Round Up and, just to confuse the issue, ‘Halflights’ precedes ‘Longing For Home’ which I covered recently. ‘Halflights’ has a much starker feel, the opening track having a feel of early Simple Minds to it. The vocals have a fragility to them and the sparse soundscapes really resonate.

Haunting melodies and an absence of frippery give a genuine feel to the music with its unadorned grace. It’s not particularly cheerful though but it does what it sets out to do extremely well being different in character to the current album. In fact, if you’d only listened to ‘Longing For Home’ you would pigeonhole them squarely in the Riverside bracket, this earlier release shows they have a darker and more personal side to their music and I would love to hear a hybrid of the two styles on their next album.

Favourite Track – The haunting simplicity and bared soul of Bluebird. I never knew I was a fan of roots music until late last year when I got talking to Bloody Great PR main man Loudon Temple and he sent me quite a few CDs to get me going. I’m having some kind of second wind and you’ll see a lot over the next few articles starting with the wonderful Laura Cortese & The Dance Cards.

It’s roots and folk music but not as you’d know it as there are definitine touches of 70’s California around the fringes, think Mamas & Papas, Fleetwood Mac and the ilk and the delightful harmonised vocals brings to mind Wilson Phillips debut release from 1990, especially on the title track. The wonderful, fiddle, cello and bass playing of her fellow Dance Cards imbues this wistful release with a boldness and elegance that is apparent in every perfectly placed note.

These clever and inventive musicians really push the boundaries of what you’d normally consider to be folk music, check out the hip hop pulses of single Pace Myself, maybe not a reinvention of the whole scene but certainly something that refreshes and reinvigorates.

Favourite Track – The breath of fresh air that is California Calling.