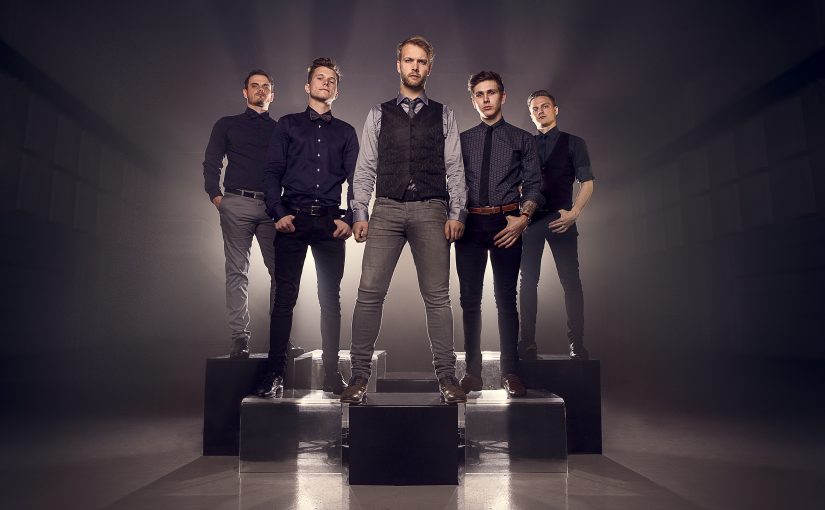 I’ve had very little listening experience of Leprous, so the offer of a chance to review this album was eagerly grabbed! Firstly, my credentials. Since July 5th 1969 (a date famous for King Crimson’s appearance at The Rolling Stones “Free in Hyde Park” gig) I’ve been an avid “prog” fan. OK, that’s out of the way so here goes:-

The amount of “prog” hurled at us these days is bewildering, and a chance to get an early listen to a new album free of any expectations or recommendations aroused my curiosity.

Norway’s Leprous isn’t easily “pigeon-holed” in a sub-genre… The album opens with Bonneville – a beautifully thought out track that shows off Einar Holberg’s ethereal voice to perfection. The depth of sound gradually increases drawing the listener in… to… Stuck – a more upbeat song with a twanging guitar backing those soaring vocals once more. The drums lay down a compelling rhythm complimenting everything else. This is a longer track at 6 minutes 49 seconds but it flies by, never getting stuck at all. A very pleasing satisfying experience.

Next up is From The Flame – another song with drive and a great hook that is still going round my head! Job done – can see this one becoming a favourite and possibly released as a single? Ahh – Captive – a punchy opening to the shortest track (3.44), melodic vocals over a pizzicato guitar and strange rhythms. Great harmonies too but it will take a bit of time to understand I think.

Illuminate & Leashes – two 4 minute tracks, slower in pace and highlighting the soaring counter-tenor voice of writer/keysman Einar. His is a voice that intrigues me, soft and gentle at one point, rocky and strident at another… I could listen to him all day long!! (I now plan to seek out the Leprous’ back-catalogue)…

Shimmering keys work opens the next track, Mirage, leading to a wall of sound that then fades to a song that shows traces of a Middle-Eastern structure… Intriguing bass line around 3.30 into the track… “I have been trying to break out for too long from the cage…” sings Einar! Oh definitely they’ve done that!

Malina – Bulgarian for raspberry – but no raspberries for this album so far! Beautiful lyrics over a lighter beginning that builds to a crescendo and some frenzied drumming from Baard Kolstad. Roses for this one!

Followed by Coma, a shorter track much like 5 & 6. Dare I say that this track didn’t exactly place me in a coma? Great – “I still feel the heat, no retreat” !!!

Next up a heavier song, The Weight Of Disaster – those heart-string tugging vocals again, why hasn’t Leprous loomed over my horizon before?

The Last Milestone is the last song on this fabulous album. This track wouldn’t be out of place performed at a concert of modern classicist composers like Henryk Górecki… Plaintive vocals over strings and keyboards. Eat your hearts out audiophiles!

Altogether, this one album has opened up a new sound-world for me. I thought that, although I’d heard it all, there is always something new around the corner! I shan’t be so smug in future, and indeed will look forward to the NEXT milestone!

I read from the press release that this album is a change in style for Leprous – I hope they continue to develop it further. Now for that back catalogue – my interest has been kicked in the backside and made to wake up!