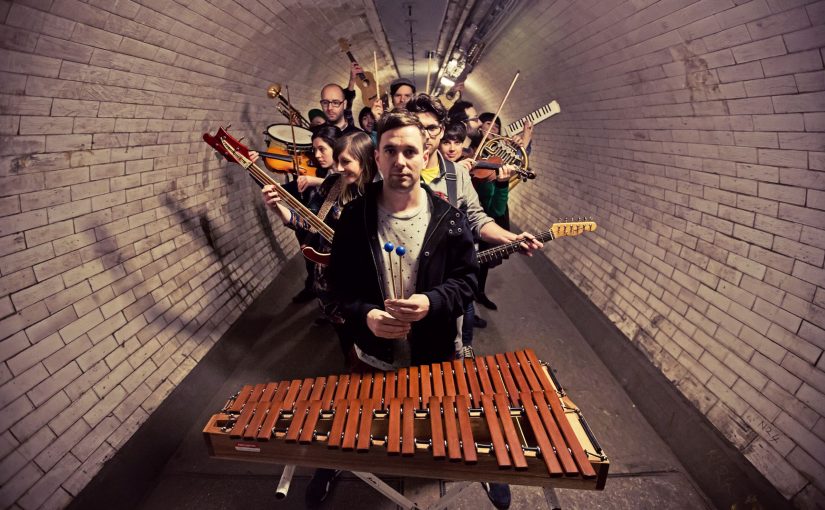 I absolutely adored the second album from Human Pyramids, the cinematic, orchestral supergroup from Glasgow, Scotland. Released in 2017, ‘Home’ was uplifting, inspiring and a salve to the soul, all delivered with a touch of fun and humour in one undeniably wonderful package.

So I was definitely a happy bunny when I received an email about a follow up to that bundle of joy. Led by Composer/Producer Paul Russell, ‘Power Pose’ features musicians from Axes, Suicide Bid, Admiral Fallow, Scottish Ballet and Puff Uproar.

Their third album was recorded all over Scotland, London and Berlin. With luscious strings, rousing horns, shimmering woodwinds and bubbling synths, the album expands upon their trademark euphoric sound from the first 2 records which have sound-tracked countless TV shows, documentaries and films. The album was mastered by Joe Lambert (Dirty Projectors / Animal Collective) in Jersey City.

A musical experience like no other, Human Pyramids give us instrumental music that appears to come from a world where children’s TV could provide the soundtrack to life, an innocent joy abounds throughout the the twelve engaging and compelling tracks, opener 4000 Miles using strings and brass to wondrous effect. Like a glorious sunrise rising on a virtuous, unblemished world, it lifts your heart and makes your soul soar.

There’s playfulness and candour in the pared back delight of tracks like Volcano and Treacle and pomposity and fun in the catchy drive of Boxing Day. I always felt there was a childlike awe at the heart of ‘Home’ and that perception continues with the excellent Confetti and in the staccato strings of Hospital Radio.

‘Power Pose’ sees the collective deliver more maturity without losing the spontaneous touch inherent on the previous album. The enchanting and captivating music continues through Memory Map, the off- kilter, sometime country blues aura of Wisdom Teeth and Hanlon’s Razor and culminates in the incredible fun-filled high energy brass of the funky The Mighty Atom and the more laid back final track Trouble.

I think Paul and the rest of Human Pyramids have given us what is possibly the most playful, captivating, bewitching and beguiling album of 2019, it’s like a celebration of all that is good in this world delivered wrapped up for you to open on Christmas Day (Yes, that is the release date!). By golly, we really must all have been very good this year…

Pre-order, and listen to 4000 Miles, from the link below: