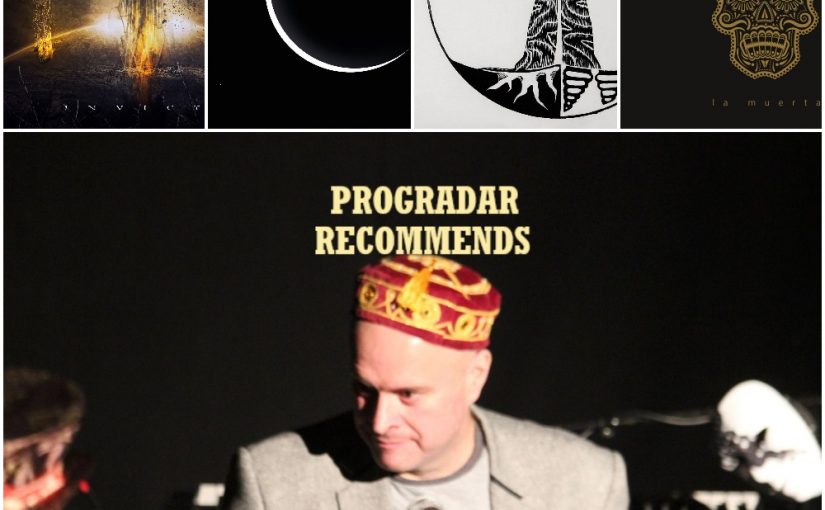 Welcome to the third edition of my Progradar recommendations, this time around we have the new albums from HeKz, Emperor Norton, Malady and Subsignal… From the first notes of album opener Quetzlcoatl it is apparent that the rising stars of UK prog-metal, HeKz, have gone balls out on new album ‘Invicta’. This mighty powerful five piece from Bedford certainly know how to turn the amps up to 11. The Brian May-esque guitar and Matt Youngs flamboyant vocals that slot somewhere between Freddie Mercury and Justin Hawkins combine to take you on a thunderously wild ride of progressive metal pomp and circumstance.

For Our Lives is a adrenaline fueled rock anthem with totally excessive ( and utterly addictive) riffage and vocal harmonies aplenty, this band know how to give the audience what they want. There’s a couple of ballads and The Devil’s Coin is a properly progressive fifteen minute track to prove they have the chops but, overall, what you get is an thoroughly enjoyable blast that will blow the cobwebs out of your hair and leave a stupid, inane grin on your face for quite a long time.

I have a sneaking suspicion that HeKz will be an awesome proposition live and these dynamic and energetic tracks certainly deserve to be let out of the studio and onto an unsuspecting listening public, ‘Invicta’ is a musical tornado that will flatten everything that comes before it and leave you asking for more. Every now and again an album comes along that makes you reconsider your musical principles and stands out among a river of repetitive and formulaic releases and the eponymous debut from York’s Emperor Norton is proving itself to be one of those gems.

“Emperor Norton promptly donned the musical cummerbund of “Prog” and added “Rock” to sound cutting edge. The very next day, the group discovered – to its astonishment – that it had unwittingly declared allegiance to an underground resistance movement of cape-laden keyboard wizards, fiery plectrum wranglers and lead singers who speaketh like Shakespeare. Emperor Norton felt right at home.”

They bring a freshness to the whole progressive rock genre and almost seem to be the missing link between the bombast of the 70’s leviathans with their overblown Hammonds and jangly guitars and the modern breed of progressive influenced rock artists like Muse, Coheed and Cambria, Mandroid Echostar and Mars Volta.

Take the Steve Howe style guitar on Act I: Portents that along with the thumping bass line and swirling keys transports you back to tracks like Yours Is No Disgrace and the ilk and then segues into Act I: Petrichor with vocals that tip more than a hat to Matt Bellamy and you’ll begin to get my gist.

It’s an incredible piece of work especially considering that this is the band’s first release and, just when you think it can’t get any better, the fifteen minute joyful brilliance of the stunning Act III: Arrow comes along to prove that we really have some genre redefining musicians in front of us.

Do yourselves a favour, buy what is possibly the album of the year already and don’t just take my word for it, have a listen… “Modern music consumption isn’t built for looking at trees or wandering through mazes. We live in a culture of straight lines and constant motion. Malady ask that you opt out, reclaim your time, and slow the f**k down for once. Trust me, it’s worth it.”

Sage advice from Finland’s Malady, hailing from Helsinki theirs is a sound rooted in the 70’s with fuzzy guitars and Hammond organs swirling like only a Hammond can. With their debut a deserved underground hit the band return with a polished follow up that invokes all of the best things that vintage Scandinavian prog can deliver.

Lush vocals and organic instrumentation abound on title track and opener Toinen Toista, a song that leads us into an album full of questions about being human and the transient nature of things but, don’t worry, this release isn’t asking you to take a PHD course in existentialism or the like, it has strings on it for God’s sake!

Lazy, hazy nostalgic days are invoked by the acid jazz heavy Teidon Kehtolaulu and the fact that the vocals are in Finnish doesn’t detract one bit, in fact they just add to the mystic feel (along with the superb flute playing, you’ve got to love flutes!).

The best is saved for last with the epic twenty-three minutes of Nurja Puoli, one of the best Prog ‘epics’ of recent years. To put this all into context I have actually ordered the vinyl of this superb release and I know it is going to get plenty of play…

Order on CD or LP from Svart Records: Germany’s purveyor’s of powerful and polished progressive rock, Subsignal, return with new album ‘La Muerta’ and (according to the press release), “…sends the listener on a proper voyage of discovery that is as complex as it is eventful. Subsignal have consciously designed the path to “La Muerta” a tad more accessible than was the case with the predecessor…”

Featuring Sieges Even luminaries Arno Menses and Markus Steffen, you get the signature involving songwriting but this time the band have decided not to hold the listener’s hand and, instead, let them make their own voyage of discovery through these eleven impressively crafted tunes. The expected superb harmonies are evident on the brilliant title track and the powerful guitar work of Markus drives the album on throughout.

I was a huge fan of the last Subsignal release ‘The Beacons of Somewhere Sometime’, each track had its place in the unfolding story that was laid before you and the band have tweaked their unique songwriting process to deliver an even more immersive and intoxicating musical journey.

Drowning sees the band baring their soul with a much more pared back approach, one that features the haunting vocals of Marjana Semkina. A beautifully stark piece of music, it will leave a mark on your soul that will stay for a very long time.

With the wonderfully lush production (courtesy of Yogi Lang and Kalle Wallner of RPWL) giving the songs enough air to breathe, ‘La Muerta’ sees the band full of self-confidence and delivering a collection of songs that, while easily able to stand on their own, are a collective force when dealt with as a whole.

Pre-orders will open soon at Gentle Art of Music: