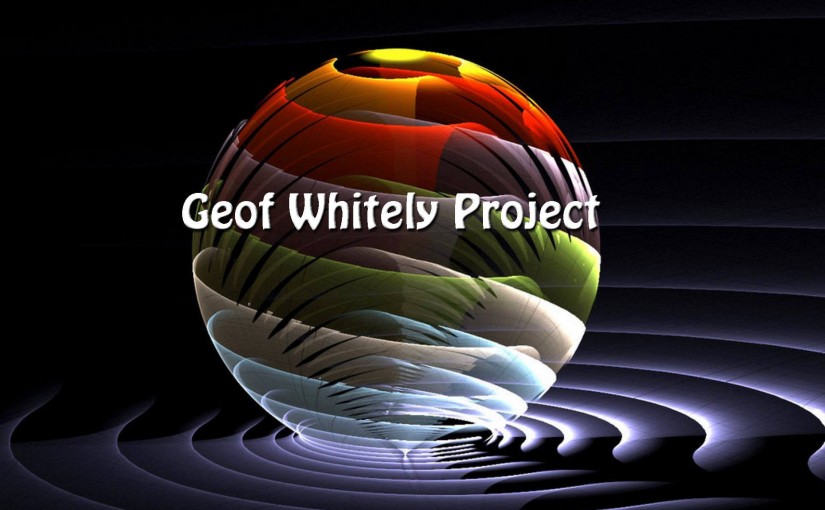 ‘Prolific’ is a word that I have to use when you talk about album releases from the Geof Whitely Project. The man behind this musical phenomenon, Arny Wheatley, has released a bewildering number of albums over the last few years and it is a testament to his songwriting that they have remained high calibre with no loss in quality or content.

So, imagine the shock when it was announced that ‘Sempiternal’ would be the only album release from the Geof Whitely Project in 2018? Well, if it is going to be the solitary one, it had better be good eh?

Arny always seems to give some a little different but without straying too far from his so far successful formula and the new release is no exception, delivering powerful and brooding tracks like opener Stir of Echoes. It’s perhaps the most dark and serious track on the album and it really hits a nerve with me, lengthy at over nine minutes, there is no wasted space and every note has meaning. There’s a lifting of the obfuscation with Hidden Depths but not the serious overtones, a really mature piece of music where Arny’s thoughtful vocals work their usual magic. The signature keys and guitar sound all add to the mix to give another melancholy and yet contemplative track. A wistful and reflective two minutes follows with the measured instrumental delights of Isolation. Like a calm oasis, it mops your fevered brow before you carry on further on your musical exploration.

Low End Distortion has a slow burning intro before an aggressive riff takes over and gives it a seriously edgy feel. This is a real departure from the signature sound, a more hard rock infused track that Arny pulls off really well. That driving riff is the key to the song, powered on by the effective and dynamic rhythm section. Arny takes the vocal duties in his stride as usual and you are left with one of the best Geof Whitely Project tracks I’ve had the pleasure to listen to. A stirring and involving song, Overseer is measured and studied, the sax style keyboards are a real delight and instill a real grace and calmness to the music. This is a track with real passion at its core and Arny’s sparse vocal delivers that with aplomb. Another fast paced, rockier piece, Fairground Distraction even gets my foot tapping to the beat. I like this edgier, more vibrant direction that Arny takes on these tracks, giving them a dynamic and energetic flow that you really engage with.

There’s a lovely piano tinged opening to the emotive Momentary Lapse and its steady,measured pace does remind you of a certain Pink Floyd in places, Arny’s voice even sounding David Gilmour like (that could just be me though!). It is a moving and poignant sounding piece of music that once again shows that Arny is at the top of his game here, just check out the instrumental section around two thirds of the way through and you’ll know what I mean. A powerfully inspiring song that I really like. Ooh another guitar riff! The Voice isn’t as in your face as the earlier, harder tracks but has a great opening that includes a forceful riff and potent rhythm section that imbue it with authority and stature. The verses have a more reflective feel to them but the chorus is significant and substantial and the juxtaposition between the two works exceedingly well. The final track on the album is On a Strange Tide and it has feel of Floyd to its opening again, a bit ‘Shine On..’ with its mysterious and moody synth sound that builds slowly. A wistful and nostalgic song that has a hint of melancholy running through it. Arny’s voice is reflective and musing and the music has a touch of longing at its centre. Swirling synths and brooding guitars abound and there’s a weighty and significant atmosphere that builds all around. A serious and meaningful track to close out this impressive album.

Well, if ‘Sempiternal’ is the Geof Whitely Project’s only album release of this calendar year then Arny has delivered what is, in my opinion, far and away the best GWP record so far. High praise that may sound like but it is worth every word. A more expansive and harder sound combined with some excellent songwriting, one not to be missed.