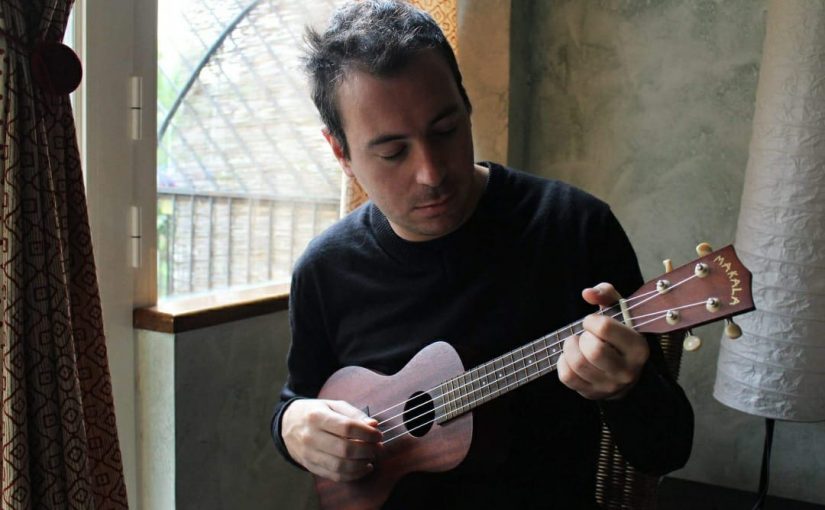 One thing I really like about working with independent musicians is the fact that I get to see how their musical projects develop from start to finish, often being the first to hear the end product or asked for my input as to how I think it is developing.

I was suitably impressed saying that, “…ultimately I feel relaxed and as one with the world as I listen to this beauteous offering. Trust me, you should do yourselves a favour and listen to it too.”

Out of the blue Mirko contacted me again asking me if I would review his second album, ‘Helios’, due to be released in November. I was intrigued to see what musical direction he had taken on this new record so it was a bit of a no-brainer really! Calling himself a ‘One-man post rock instrumental project’, that’s what you got from the first album, chilled-out, laid back and relaxed but ‘Helios’ sees him blend that original style with something a bit heavier and more aggressive at times.

Opening track Buried Under Remote Lands has a repeated, chilled out guitar line reminiscent of the sound of Sanguine Hum, an addictive melody that runs throughout the song. The dynamic rhythm section adds some stylish drama to everything and you get the feel of floating on a cloud of elegant music that takes you away from the stress and worry of life in the fast lane. That darker edge is first heard on the rather frenetic and energetic tones of Polemic Guy Wants To Fight with its crashing guitar riffs and superb drum and bass rhythms. A surprise from start to finish, Mirko has really extended his musical horizons with this track, I really like it, the spirited close is genius!

Daffodils Crashing Into The Water returns to the wistful and nostalgic tone with its chiming guitars and dreamy atmosphere. A gentle musical journey through a world of calm collection and reflection. It’s one of those pieces of music that really lifts your spirit. The addition of the delightful violin playing of Giulia Ermirio adds an ethereal grace to what is already a graceful and charming piece of music. A pensive and sombre track, Set Your Firearms Against The Sun builds up from solemn beginnings with its absorbing guitar and keyboard note into something elemental and primeval. The sound turns ominous with the restless riff and the questioning guitar note, like a soundtrack to a sci-fi film about an apocalyptical future. It really gets under your skin with its deliciously dark and uneasy feel, Mirko is really stretching his musical boundaries here!

Mirko says that title track Helios is the most ‘proggy’ song on the album and, to a certain extent, I’d have to agree. It begins as all relaxed and laid-back post rock that draws you into its winsome and captivating world, relaxed, chilled and without a care in the world. Music for hot, hazy summer days that never end, looking back on the good times and forgetting the bad. A vibrant riff opens up, giving a more intense mood and atmosphere but still charismatic and engaging before a more subdued and thoughtful aura falls over the music, a nostalgic feel of looking back at how life used to be. The gossamer-like guitar notes landing randomly on your aural receptors, it’s actually a very cathartic and soul-cleansing piece of music that sees your pulse rate drop and your mind clear. Twelve minutes of music that could make all psychiatrists redundant..

The final track is Time To Destroy My Life Capsule and the opening takes the more ambient route again, harmonious melodies leaving an ambience of soothing tranquility in the air. There’s a short period of reflective silence before a more insistent tone takes over, never dark but questing, more demanding and with a slight touch of that new found aggression. Everything comes full circle once again though as the serenity returns to see this track and the album to a close.

Mirko told me he was worried about the fact that the few who loved ‘Infinite Mirrors’ might be in some way confused about this more aggressive sound. I can happily attest to the fact that this is not the case, that edgier and sometimes darker feel has added another level of innovation to Mirko’s music and produced an album of many sophisticated layers that intrigues and delights with every note. A superb return from Misto indeed!

Release date to be announcedon Misto’s Facebook page in the next few days, keep checking below:

You can listen to ‘Infinite Mirrors’ at bandcamp here