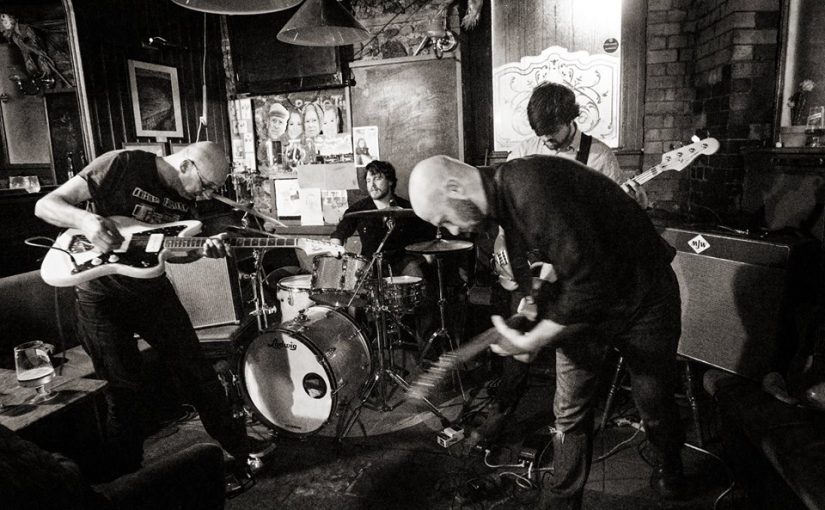 I have no idea at all how Bristol instrumental band, The Brackish have slipped through my radar considering I live in Bristol and have been to a fair few alternative and prog gigs here, considering they’ve been plying their trade since 2013, and I’ve been back since 2014 you’d have thought I’d have found them by now.

Still, I have, and as usual it’s chief Elephant David Elliot who, when not pestering Tom Slatter for an album, is out their finding new bands for us to enjoy.

He puts the miles in so we don’t have too, reward yourself with a curry for this one David, you’ve earned it!

With a wide spectrum of releases this year, it seems only appropriate that from the home of The Fierce and the Dead comes an all instrumental guitar driven album, powered by the duelling guitar work of Luke Cawthra and Neil Smith and driven by Matt Jones on drums and Jacob Myles Tyghe on bass.

Running the gamut from psychedelic rock to the blues to elements of King Crimson, their sound is fresh, funky and powerful.

From the opening title track with it’s mix of funky riffs and languid guitar work, the intricate wall of sound that is The Brackish calling card is deployed to great effect, the way the duel guitars work in tandem particularly during the quieter passages brings bands like Wishbone Ash to mind, whilst the drum and bass anchor the music, allowing the guitars to fly. There is a lot of skill and ability here, and whilst it’s very easy to make an instrumental album, it’s also very easy for people to dismiss instrumental music as nothing more than wallpaper (as I’ve said before and will no doubt say again!) but when it’s done well, as it is here then it’s a joy to behold.

Making music is like a sonic jigsaw, if the pieces don’t fit it doesn’t work, here however is sheer musical bliss, the diverse sounds and mood changes in Loggins Breakdown for instance is worth 11 minutes of anyone’s time, and if you disagree you I’ll set Tom Slatter on you!

Their mix of light and dark is sublime, as is their use of funk, particularly on the toe tapping Something Negative on the Dancefloor (maybe they’ve seen me dancing) and here the bass is adding to the sound, making it a third guitar.

Cactus Gulch and the Hellish Walk Home is 12 minutes of sheer brilliance, from the title to the driving riffs and time changes, it feels like a musical journey and one you want to join them on, the interplay between all four of them is amazing and you can tell they know exactly where their sound needs to be at any one time, and it’s wonderful to hear such musical empathy.

Their sound is unique, and this finely crafted and sublimely performed album is another musical string to the Bad Elephant bow, my new Years Resolution is to see The Brackish live in Bristol, and I urge you all to do the same.

Buy ‘Liquid Of Choice’ from Bad Elephant Music on bandcamp